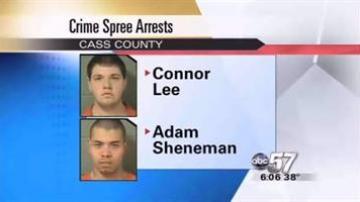 EDWARDSBURG, Mich.-- Thursday, two men accused in a crime spree that ended with a large fire, are in jail.

Police think that they purposely set fire to an old storage building in Edwardsburg.

They may also be tied to four other crimes, including some business break-ins.

A number of wooden pallets were also found soaked in diesel fuel.