US, Iraqi troops close in on last ISIS-held city 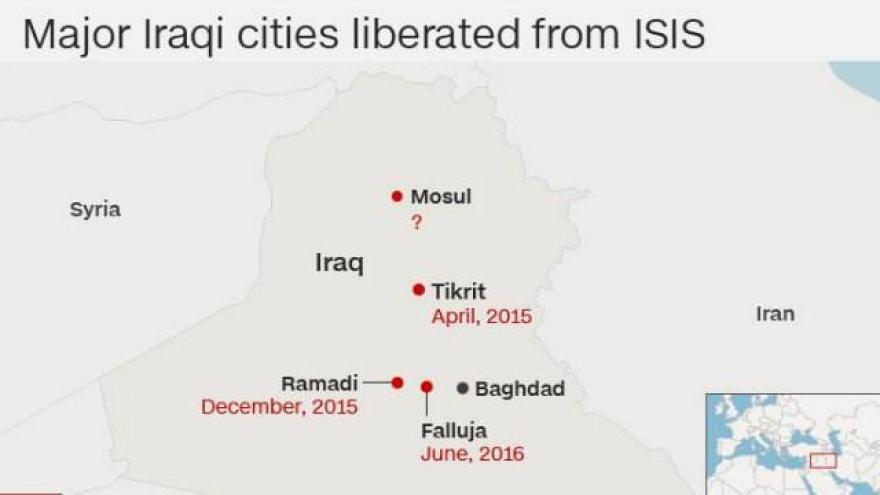 WASHINGTON (CNN) -- Hundreds of US troops have arrived at an air base 40 miles south of Mosul to support Iraq's efforts to liberate that city from ISIS, a US defense official told CNN.

Qayyarah air base was recaptured from ISIS by Iraqi soldiers backed by US airstrikes in July and the American forces operating there will mainly provide logistics, supplies and support for the Iraqi offensive on Mosul. The move brings US personnel closer to the battle and ISIS' defensive lines.

Asked if US forces advising the Mosul operation faced increased risk, Pentagon press secretary Peter Cook told reporters Thursday that "the secretary (of defense) has made clear that our forces in Iraq are in harm's way. Everyone who is serving there is in a dangerous situation."

The air base is also expected to be rebuilt to allow US and coalition aircraft to operate there, since its proximity to Mosul makes it tactically important.

"When the (Iraqi Security Force) is ready to move on in their operations to get after Mosul, we'll be prepared to support that and the airfield will be ready," Lt. Gen. Jeffrey Harrigian told reporters Tuesday at the Pentagon.

"This is a partnered effort. This is something we're working from both the land component perspective with the Iraqis and clearly ensuring that, as we begin to put some of our airplanes in there in the future, that it's got the capabilities that we need," Harrigian added, describing efforts to prepare Qayyarah.

The assault on the last major Iraqi city held by ISIS could begin as early as October, according to several US officials.

The next stage of the effort will involve attempts to seize towns and villages on the southern outskirts of Mosul.

Iraqi security forces air dropped thousands of leaflets south of the city over the weekend warning citizens in anticipation of a new offensive.

"Protect yourself, don't be human shields for the enemy, leave the town immediately," a leaflet shown by the Iraqi military to CNN said.

The coalition is stepping up airstrikes along key infiltration routes into Mosul in hopes of keeping the city from being reinforced further by ISIS, a US defense official added.

The fight for Mosul is expected to be a difficult one with defense officials and intelligence analysts saying that ISIS has dug-in since it first seized the city back in 2014.

There are 3,000 to 4,500 ISIS fighters in Mosul, according to Operation Inherent Resolve spokesman Col. John Dorrian.

"There is still a tough fight ahead against an adaptive enemy that will try to challenge us as we hone in on Mosul," Harrigian, the commander of US air forces in the Middle East, said.

Mohammed Tawfeeq contributed to this report