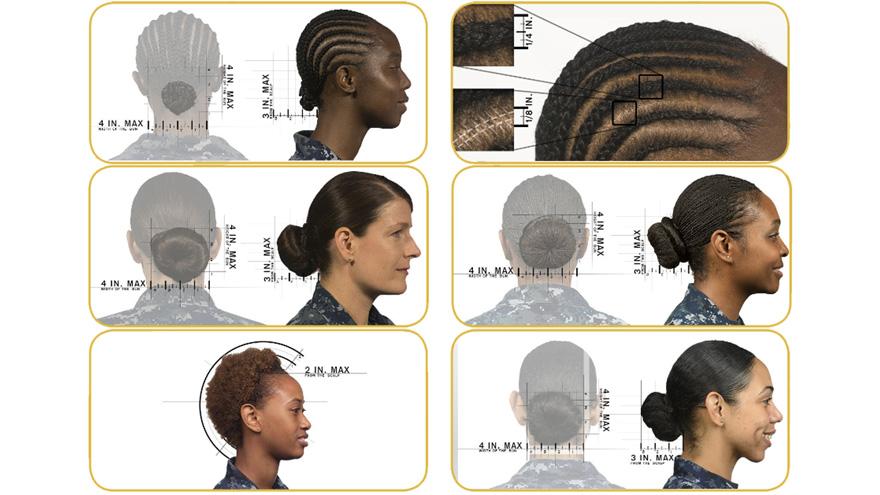 PROVIDENCE, R.I. (AP) — The Navy says it will now allow servicewomen to sport ponytails and other hairstyles, reversing a policy that long forbade females from letting their hair down.

Many black women had asked for changes to the female grooming standards. A female sailor, Yeoman First Class LaToya Jones, announced the new policy during a Facebook Live event Tuesday with Richardson. The new standards went into effect Wednesday.

Lock hairstyles, or ropelike strands, are also now allowed. Wider hair buns too. And women can wear ponytails while in uniform.

Capt. Thurraya Kent is the senior member of the working group that recommended the changes. The group told the Navy that adding grooming options would eliminate a distraction, be more inclusive of different hair textures and enable people to keep their hair natural instead of processing it chemically.

Kent, who has been in the Navy for nearly 26 years, said her hair has been an issue throughout her career, whether it's figuring out what to do with it while she's deployed or trying to quickly make sure it conforms to regulations after exercising.

She recalled being told to take out her braids early in her career even though her hairstyle was allowed.

"Because of the texture of my hair, it stood straight up it," Kent said. "It was a very embarrassing moment that stays with you."

She said she's very encouraged that Navy leaders both listened and understood.

At the U.S. Naval War College in Newport, Rhode Island, on Wednesday, women said they're excited to switch from buns, which don't fit well under helmets.

Legalman First Class Tamatha Schulmerich said she has to twist and wrap her hair into a bun because it goes down to her lower back. She said it was uncomfortable to wear that way when she had to wear a flight deck helmet in a previous assignment.

Lt. Cmdr. Jess Cameron said while allowing new hairdos may seem like a small thing, it sends a larger message.

"I think it's a step forward," she said. "They're getting more female feedback in the service, and updating what I think are somewhat antiquated guidelines that maybe no longer serve their purpose in today's society, today's military."

The Navy said it had the standards in place because of safety concerns and to ensure everyone maintained a uniform, professional look. Though the new rules permit ponytails, there will be some exceptions when working around heavy machinery.

Click here to view examples of the new hairstyle regulations.