US notifies UN of intent to pull out of climate deal 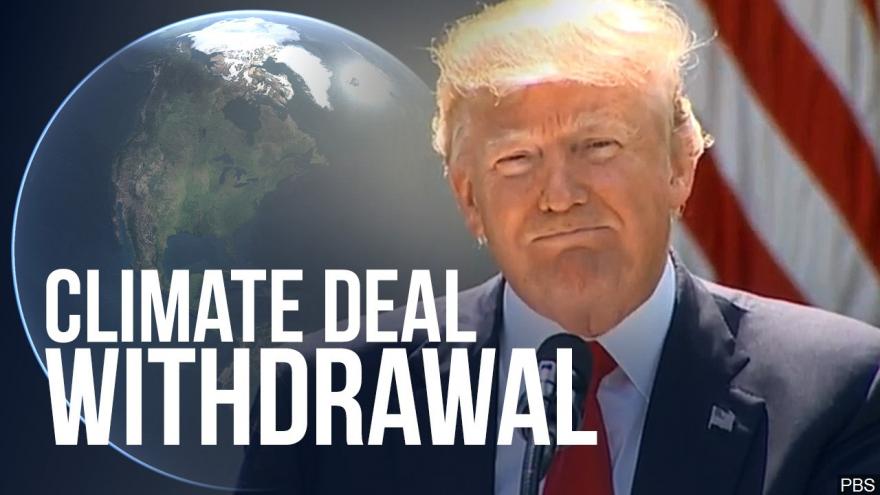 (CNN) -- The Trump administration took another step Friday towards exiting the Paris climate agreement, notifying the United Nations of its decision to leave the deal even as it pledges to stay engaged on the issue of climate change.

"The United States supports a balanced approach to climate policy that lowers emissions while promoting economic growth and ensuring energy security," the State Department said in a statement to reporters announcing the UN notification.

"We will continue to reduce our greenhouse gas emissions through innovation and technology breakthroughs and work with other countries to help them access and use fossil fuels more cleanly and efficiently and deploy renewable and other clean energy sources, given the importance of energy access and security in many nationally determined contributions," the statement added.

The notification comes two months after President Donald Trump announced his intention to leave the accord, fulfilling a longtime campaign promise and rejecting appeals from other world leaders to stay in the deal.

Currently, all but two nations -- Syria and Nicaragua -- are signatories to the accord.

This latest move is largely symbolic, solidifying the administration's plans to the international community. The actual withdrawal process will prove lengthier and cannot be initiated until 2019 at the earliest.

In its statement Friday, the State Department indicated it will remain somewhat engaged on issue of climate change, announcing plans to participate in a major international climate conference in November.

Earlier this week, two studies concluded that global temperatures are likely to rise more than 2 degrees Celsius (3.6 degrees Fahrenheit) by the end of the century -- a symbolic threshold the Paris agreement explicitly seeks to avert.