Venezuela's attorney general: 'This is the end of freedom of expression' 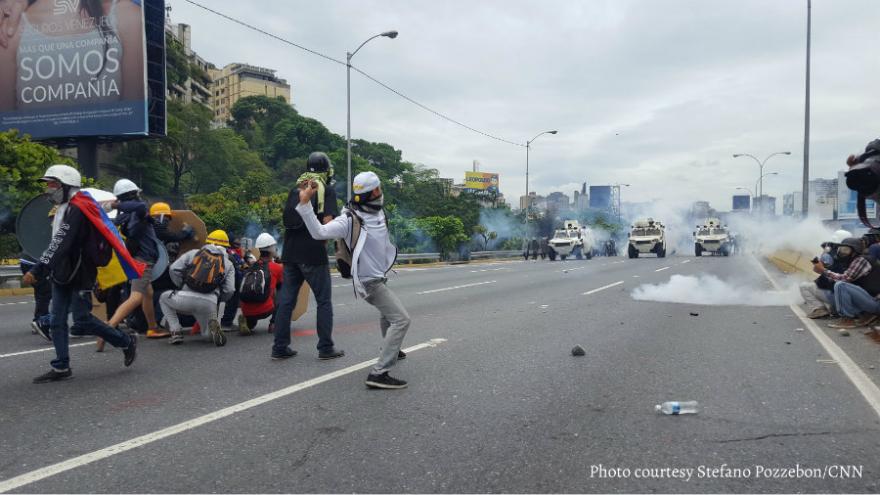 "This is the end of freedom of expression, and this freedom has been battered for some time now," Attorney General Luisa Ortega said Monday.

"This is a smokescreen to hide the corruption and crisis that Venezuela faces. But they will have to climb over the institution that I represent, the people of Venezuela and our constitution."

But that constitution is now in jeopardy.

Maduro declared a victory in a vote that much of the world -- and many of his own citizens -- have called a sham and an assault on democracy.

The election could replace the current legislative body, the National Assembly, with a new, 545-member Constituent Assembly, all nominated by his administration.

The new, pro-Maduro assembly will have the power to rewrite Venezuela's constitution.

Maduro argued that the Constituent Assembly will help bring peace to a polarized country, with all branches of the government falling under the political movement founded by his late mentor and predecessor, Hugo Chavez.

But the opposition boycotted the election, calling it fraudulent, and saying the Constituent Assembly will erode democracy.

The US State Department said the elections were "designed to replace the legitimately elected National Assembly and undermine the Venezuelan people's right to self-determination."

President Trump, in a statement read Monday by national security adviser H.R. McMaster, said: "Maduro is not just a bad leader, he is now a dictator."

Ortega, the country's attorney general, said she "will not tolerate this and will not stand down. I will continue to be vocal about human rights abuses."

Earlier this year, Ortega had her assets frozen and was ordered not to leave the country, but she has managed to stay in power.

"This is why they want to get rid of me," she said. "I am bothersome for those involved in corruption."

Venezuela's National Electoral Council said more than 8 million people, about 41.53% of registered voters, cast ballots Sunday. That marked "the biggest turnout that the Bolivarian Revolution has had in its entire 18-year history," Maduro claimed.

But National Assembly President Julio Borges tweeted that the claim of 8 million voters was almost triple the actual turnout and marked "the biggest electoral fraud in our history."

The National Electoral Council hasn't announced the formal results, but since the opposition boycotted the election and didn't put up any candidates of its own, a victory for Maduro's side is guaranteed.

On top of that, first lady Cilia Flores and pro-Maduro former Foreign Minister Delcy Rodriguez both received enough votes to become members of the Constituent Assembly.

On July 16, more than 7 million Venezuelans cast ballots in an unofficial vote against Maduro's Constituent Assembly. Maduro ignored the results of the vote.

Young Venezuelans have taken to the streets for months to protest the vote, known locally as "la constituyente," or the constituent. The Venezuelan National Guard and protesters clash nearly every day.

Maduro's opponents control the National Assembly, holding 112 of the body's 167 seats. The opposition has been battling with him for political power since they won a majority of seats in December 2015.

But before the winners of those elections took office, Maduro stacked the country's Supreme Court with loyalists to prevent his own impeachment.

Speaking after Sunday's controversial election, Maduro claimed that the opposition turned down an offer from his government to postpone the vote.

Two weeks ago, representatives of his government offered the opposition the chance to put up candidates for the Constituent Assembly election and to postpone the vote for 15 days, Maduro said. But the opposition refused Maduro's offer, calling the vote illegitimate, the President said.

The country braced for more protests Monday as the political crisis has led to more than 121 deaths since April.

As dozens of police officers on motorcycles rode through a Caracas neighborhood, a large explosion went off. Agence France-Presse video captured footage of two officers, each with a leg on fire.

On Monday, the attorney general decried the dozens of deaths and said the government doesn't care.

"The government dances and laughs while our people are dying," Ortega said. "This is the state of the country."

What's next for Venezuela?

Many world leaders say the vote erased any last traces of democracy in Venezuela.

Then there's the economic fallout. The United States already sanctioned 13 Venezuelan leaders connected to Maduro last week. And on Monday, the Trump administration slapped sanctions on Maduro himself.

While the sanctions could ultimately worsen the county's food shortages, some protesters say it's a risk they're willing to take, since it might drive more Venezuelans to try to push out their government.

"The sanctions that will come from the United States -- I'm not looking forward to them because that afflicts us as people," said a 33-year old protester who identified himself only as Victor.

"But I want it because I know it can create enough pressure on the government."

After the US sanctions on Venezuelan officials, Mexico, Colombia and Panama followed with their own sanctions against the same people. Brazil, Canada and Guatemala denounced the vote. And the Organization of American States deems the vote illegal.

But Nicaragua came to Venezuela's defense, praising it for the "historic day for the brave people."

Bolivia, too, defied international claims the election was a sham. Its foreign ministry called for the world "to respect the democratic process taking place in Venezuela, in which only the citizens of this country can define their future in the Constituent Assembly."