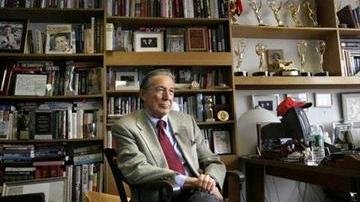 He was 93 years old and had been in declining health in recent years. A cause of death has not been released yet.

This morning, "Face the Nation" host Bob Schieffer announced his death on the program.

Schieffer said Wallace died Saturday night at a care facility in New Haven, Conn., where he had lived in the past several years.

"It is with tremendous sadness that we mark the passing of Mike Wallace. His extraordinary contribution as a broadcaster is immeasurable and he has been a force within the television industry throughout its existence. His loss will be felt by all of us at CBS," Leslie Moonves, president and CEO, CBS Corporation said in a statement on the CBS News website.

Wallace was a correspondent on the CBS News program "60 Minutes," since its premiere in 1968 where he earned a reputation as one of the toughest interviewers in the business.

He spent 38 seasons with the program before announcing his retirement in 2006.

But Wallace remained as correspondent emeritus with the program and still occasionally contributed to the news magazine and CBS News platforms after the 2005-06 season, according to his official CBS News biography.

When he announced his retirement, Wallace told CBS News' Bob Schieffer that the job has been a quite a journey.

"To go around the world, to talk to almost anybody you want to talk to, to have enough time on the air, so that you could really tell a full story," Wallace said at the time. "What a voyage of discovery it was." Over the years, Wallace sat down with seven U.S. Presidents as well as other world leaders, celebrities, sports stars, and controversial figures like Dr. Jack Kevorkian, Jose Canseco, Yasir Arafat and Iran President Mahmoud Ahmadinejad.

His investigative reporting in the 1990's revealed the secrets of the tobacco industry and inspired the Hollywood movie, "The Insider."

Wallace also made his name as a war correspondent in the 1960's, covering Vietnam.

He started his journalism career in the 1940s as a radio news writer and broadcaster for Chicago Sun.

During his remarkable career, he won more than 20 Emmy Awards and several other honors.

He also wrote several books including "Between You and Me," with Gary Paul Gates and "Heat and Light: Advice for the Next Generation of Journalists" in collaboration with Fordham University journalism professor Beth Knobel.

ABC News President Ben Sherwood said Wallace was "an intrepid journalist who used the medium of television to powerful ends. A pioneer of broadcasting and network news, Mike was there at the creation."

"Every Sunday night America tuned in to see what questions he would ask and who would be exposed to his hard charging quest for the truth. Mike's tough questioning inspired generations of journalists. Our thoughts are with our former colleague Chris and his entire family," Sherwood said in a statement.

He is survived by his wife Mary Yates Wallace, his son, Chris, a stepdaughter, Pauline Dora, and stepson Eames Yates.

A special tribute to Wallace will be broadcasted on "60 Minutes" on April 15, according to CBS News. The Associated Press contributed to this report.