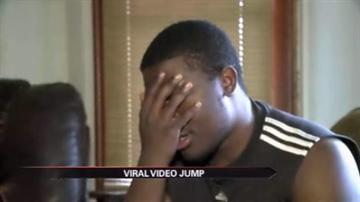 ELKHART COUNTY, Ind. -- Video of an Elkhart teen jumping into what he thought was a shallow puddle has been making the rounds on social media sites. The video was recorded Saturday in a parking lot off Goshen Avenue.

The puddle looked like any average parking lot puddle, so when Lakeem Cook took a bet to jump into it to make a big splash, he didn't think twice.

"I thought it was just a little puddle, like ankle high maybe,” said Cook.

But it turned out the puddle wasn't a puddle at all.

"As soon as my head caught underwater, I think I panicked a little bit,” said Cook.

His friends recording the dare were just as surprised when he disappeared from view.

Cook had unwittingly jumped into an open dry-well.

"Basically an empty hole in the ground and it collects water and allows it to infiltrate into the ground,” said Tory Irwin, Utility Engineer, City of Elkhart.

The surface of the parking lot had deteriorated causing the cap of the well to fall into the well, leaving behind a gaping hole.

"That didn't occur overnight, the top of that manhole must have been degrading over time,” said Irwin.

The cell phone video of cook’s puddle jumping surprise has been plastered all over social media.

"I saw it about 20 times yesterday at school. Everybody gave me a little grief about it,” said Cook.

A lot of grief came from his parents.

"My mom was very, very worried. My dad said, ‘You know, you could have busted your head and we could have ended up taking care of you,’” said Cook.

Cook recognizes now how lucky he was and says from now on he won't take bets so lightly.

"It's all been a learning experience,” said Cook.

The landlord for the property says he plans to have a crew out by next week to repair the dry well. Until then, it is covered and marked.