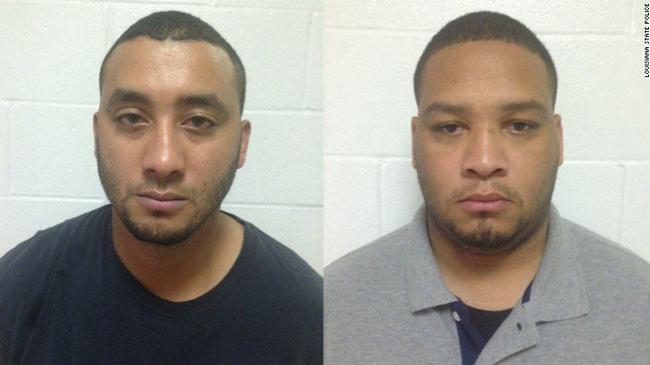 The incident, which happened in September 2015, resulted in the indictments of two marshals on second degree murder and second degree attempted murder charges.

The marshals began pursuing the car after they witnessed an argument between a man and his girlfriend in front of a local bar, a source told CNN. Officers moved to detain the man, identified as Christopher Few, who took off in his car.

The pursuit ended in gunfire on a dead-end street in Marksville, Louisiana.

The Superintendent of the Louisiana State Police called the video "the most disturbing thing I've seen."

It comes from a body camera worn by a separate officer, and shows back-up arriving, shots being fired, and the moment deputies realized they had killed a child.

The footage, which is very graphic in parts, shows a confused scene in which several officers discuss the situation and how best to proceed. An officer appears to say, "I don't know who all fired," to which another officer seems to respond, "I fired."

The suspect, who is behind the wheel of a small white car, is hit but not killed. He presents his hands to the officers and eventually, slowly, crawls out of the car to lie on the asphalt.

The officer wearing the body cam calls dispatch to ask about another officer's arrival time. He's asked about suspect injuries, to which he replies, "severely critical."

Two officers can be heard discussing what to do next. One says, "You want me to call state police?" The other responds, "No listen. Get all these people away. And block this off over here," gesturing to the road.

'I never saw a kid in the car'

A discussion about the suspect's condition ensues, and an officer says, "I never saw a kid in the car, bro." The officer wearing the camera says, "Yeah he's ahh...the kid is..." but doesn't finish his sentence.

The officer who is wearing the camera eventually walks around to the passenger side of the vehicle, windows have been shattered. He shines his flashlight onto the child's body, which is in the front passenger seat, and speaks to him before checking his pulse. An officer can be heard vomiting off-camera.

He later unbuckles the child's seatbelt, exclaiming "oh my God," before walking away.

Later on the video, an EMT pronounces the child, first-grader Jeremy Mardis, dead. He was hit by five bullets in the head and chest, according to CNN affiliate WAFB.

Jeremy's first-grade teacher told CNN he was autistic and did not communicate verbally.

Jeremy died, and his father survived.

Two Marksville, Louisiana, marshals were indicted on murder charges by a grand jury in December, and are awaiting separate murder trials later this year.

They were identified as Derrick Stafford, 32, and Norris Greenhouse, 23.

Greenhouse knew Few before the deadly encounter, a source familiar with the investigation told CNN. Investigators are looking into the extent of their relationship.

Defense attorney Alex Higgins, who represented Greenhouse when he was indicted, but told CNN affiliate KALB at the time that the case lacks sufficient evidence and that the indictment in no way proves guilt.

The video was released as part of an evidentiary hearing Wednesday, according to CNN affiliate KATC.

Stafford's trial is set for November, and Greenhouse's set for March.