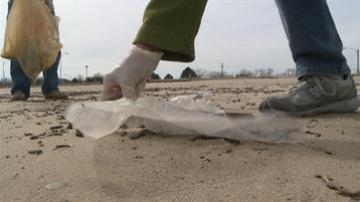 That's why volunteers are helping to clean up Lake Michigan's shoreline.

"I would just like to help be a part of keeping this one nice and beautiful," Katie Johnson, a volunteer with Adopt-A-Beach, said.

Saturday, she and other volunteers worked along Washington Park's beach in Michigan City with the hopes of ridding it of anything unnatural.

With the summer tourist season right around the corner, there's still a lot of work that has to be done. Sand has to be shifted, and litter has to be picked up.

"We haven't even begun to sanitize our beach yet," Shannon Eason, Administrative Director with the Michigan City Parks and Recreation Department, said. "So that's usually a good time to do Adopt-A-Beach to see what's really out here, before the park's staff starts cleaning."

She's in charge of making sure the nearly 800 pounds of trash collected Saturday get disposed of properly.

"It's upsetting," Eason said. "On the other hand, we look at this as a good opportunity to educate people that live along the Great Lakes and beach areas. If they actually have to consciously count what they're finding, they start to think about it."

With nearly two miles of shoreline to cover, that's a lot of upkeep, so she and other staffers depend on the goodwill of volunteers.

"I don't know if they think they put it in a garbage can and it flys away, but some stuff shouldn't have been out here," Johnson said. "Kids come out here to play and enjoy the beach, then they find stuff, so in order to prevent that, I think that's why we're out here helping."