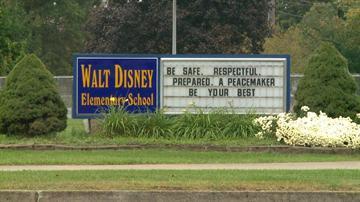 MISHAWAKA, Ind. – A fifth-grade teacher at Walt Disney Elementary was arrested at the school Friday morning by the Special Victims Unit of the St. Joseph County Prosecutor’s Office.

According to a letter sent to parents by Penn Harris Madison Schools, teacher Eric West was arrested on a misdemeanor charge stemming from communication with a child.  The prosecutor’s office confirmed that West was arrested at 11:57 a.m. at the school and booked into the St. Joseph County Jail.

Penn Harris Madison declined to comment on the case when contacted by ABC 57.  But, in the letter sent to parents, officials said they were “very concerned” about the situation and that West had been placed on administrative leave while the school system conducted its own investigation.

West was released from the St. Joseph County Jail after paying $250-bond.  The prosecutor’s office couldn’t go into detail about what he’s accused of doing, but said formal charges are pending.