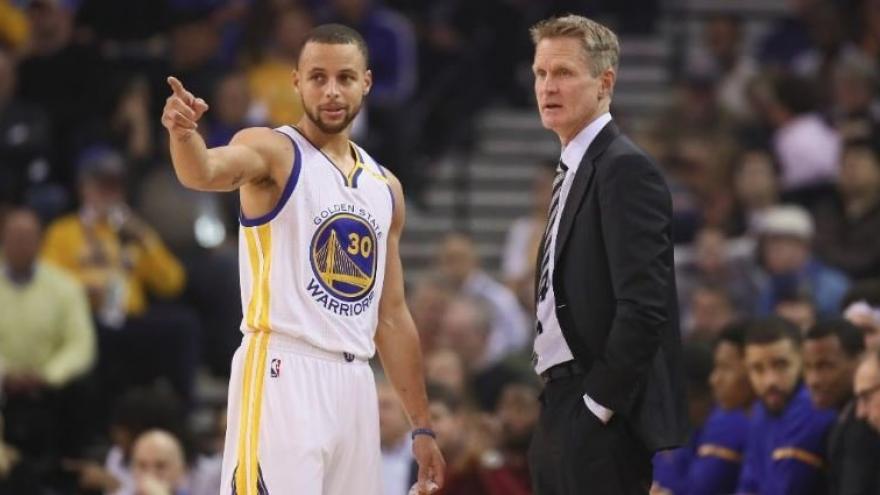 Ahead of the Golden State Warriors' trip to Washington, coach Steve Kerr told CNN's David Axelrod that a "human respect issue" was part of the reason he and his team won't be making the traditional White House visit to celebrate their NBA championship win.

The team will be in Washington in February to play the Washington Wizards.

"First, we weren't invited," Kerr reminded Axelrod during an interview on "The Axe Files," that will air Saturday at 7pm ET, recalling Donald Trump's September tweet in which he rescinded Warriors' captain Stephen Curry's White House invitation after Curry publicly said he didn't want to take part in the visit.

And besides, he said, "Our guys felt pretty strongly even before we knew that we didn't have an invitation that it was going to be a tough visit. A lot of us, myself included, have been pretty critical of President Trump."

It would have been, Kerr said, "a very nontraditional visit."

"You think about the White House visit with the championship teams, it's a photo op, it's a thrill, it's everybody's. You know, making jokes and having fun, you give the President the jersey, and that's it. And it's kind of a fun day," he added.

But now, he said, the "times have changed," and "the whole dynamic" of the traditional White House visit has "shifted entirely."

Challenged by Axelrod as to why players felt the visit needed to become a "political event," Kerr said that "it goes way beyond politics."

"I've been lucky to visit the White House with, I think, four different presidents, President Reagan, President Clinton, both President Bushes," he said.

"I didn't always agree with their policy, but I never once thought 'Oh my gosh, I'm not going to go because I disagree with, you know, immigration or some foreign policy or tax reform'," he added.

But as far as he is concerned, things are different now, Kerr said. It has become a "human respect issue."

President Trump's words and actions have been unacceptable, he said.

"It's difficult to reconcile that and just say we'll put all that aside. You know, he can make fun of handicapped people, he can, you know, he can say a lot of, you know, nasty things, ugly things, whether it's about women or whomever," he said.

That's why Curry's decision to publicly speak out against the White House was something that Kerr said he had "totally supported."

"There can be a lot of things that happen that are just really difficult to just say all right, we'll put that aside and go visit and shake his hand. It doesn't feel right," he said.