Warsaw man arrested on charges of exposing himself to Amish children 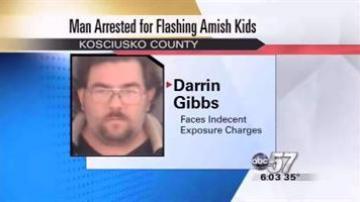 KOSCIUSKO COUNTY, Ind. --  Deputies from the Kosciusko County Sheriff's Department arrested a Warsaw man on Friday on charges of exposing himself to Amish school children.

According to a press release that police sent to ABC 57 News, police were notified this past Saturday of a possible incident that may have happened last Friday morning at an Amish school near Nappanee.

Police continued investigating based on this lead, and were able to obtain a license plate number that led them to 46-year-old Darrin Ray Gibbs of Warsaw.

In the press release, police said that Gibbs admitted to a detective that he had stopped outside an Amish school in the Nappanee area and exposed and touched himself in view of children there.

Police said this is not the first time Gobbs has done something of this nature. Gibbs has two previous convictions of indecent exposure in Michigan in 1989 and 1991.

The Kosciusko County Prosecutor's Office set his bond at $2,000.