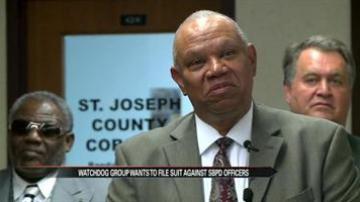 SOUTH BEND, Ind. -- Watchdog group People United for Better Government held a press conference Tuesday morning. They demanded the lawsuit filed by four police officers on May 14 be dropped and the tapes at the heart of the tape scandal be played publicly.

In December, the same officers won a $500,000 judgment against the city in another lawsuit about the tape recording scandal.

The most recent lawsuit concerns a letter Henry Davis Jr sent to the Department of Justice alleging the officers were recorded making racist remarks.

PUBG says they're upset because the money paid to the officers came directly from taxpayers' pockets.

With the new lawsuit, they're worried that taxpayers could be footing the bill again.

"My clients continue to feel like they are the villains in all of this when they are truly the victims. They did nothing wrong," said Pfeifer.

During a phone interview last week, Pfieifer said he stands by his clients' desire to file a new suit.

"The conversations that they had were illegally recorded. That makes them the victims. The content of the tapes and recording is not relevant at all," said Pfeifer.

"You know it's absolutely absurd that someone would file a lawsuit claiming they're slandered but then at the same time say it's not important what's on the tapes. I mean, that's knucklehead logic," said Sims.

Pfeifer said he wouldn't comment on the statements by the watchdog group PUBG.