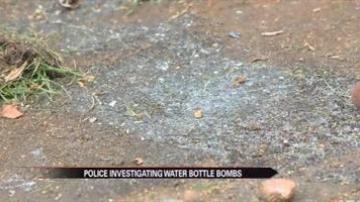 GRANGER, Ind. -- Susan Schroeder has lived in the Knollwood subdivision of Granger for 20 years, and in that time, she's seen a prank or two; mostly done by kids.

"In some instances, parents aren't paying the attention to their kids that they should be," said Schroeder.

So when she heard about a recent string of water bottle bombs being placed in neighborhood mailboxes, she wasn't surprised.

"They probably don't realize the ramifications of whatever they're doing," said Eckrich. "Some could seriously be injured."

Police said four of these homemade bottle bombs have been found in or near Granger mailboxes.

One of them was found near candidate for U.S. Congress, Brendan Mullen's house, Monday evening.

Bits of aluminum foil and acid were still on the ground Tuesday.

"If they're just looking to have some fun, then go find some place else to do that where no one's going to get injured," said Eckrich.

Neighbors like Schroder aren't sure what the motive is, but said it doesn't need to happen at all.

"Sounds to me like just a stupid prank," said Schroder. "Probably some kid that isn't very bright, and has nothing else to do."