Weeds could be killing off Magician Lake ecosystem 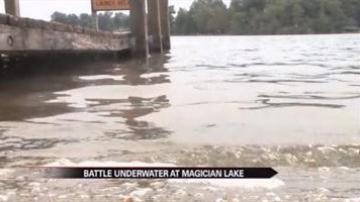 DOWAGIAC, Mich. -- It is a battle underwater. ABC 57 News strapped out GoPro camera on a Michiana diver who is trying to change the way weeds are killed.

Jenny Mehlenbeck has been scuba diving in lakes across Michigan since 1991.

"You can't get me out of the water, I am just a big old water baby," said Diver Jenny Mehlenbeck.

Mehlenbeck said lately she has been noticing something out of whack in the Sister Lakes area, particularly Magician Lake.

She said that waste is not decomposing properly and it is because of the milfoil that is sitting on the bottom of the lake.

So right now, crews are trying to get rid of the weeds by poisoning them, mainly because they have been causing issues for boaters and the local economy.

"You can't boat when your propellers are tangled up all the time,” said Mehlenbeck. “It’s such a fast grower that it’s a problem."

And it is not just money that is at stake. If the weed problem is not treated properly, the water will be too toxic to swim in.

So instead of the current method which does not totally remove the weed, the experienced diver said a little creature can do the job; to keep the ecosystem balanced.

"There is a bug called a milfoil weevil that eats only milfoil.”