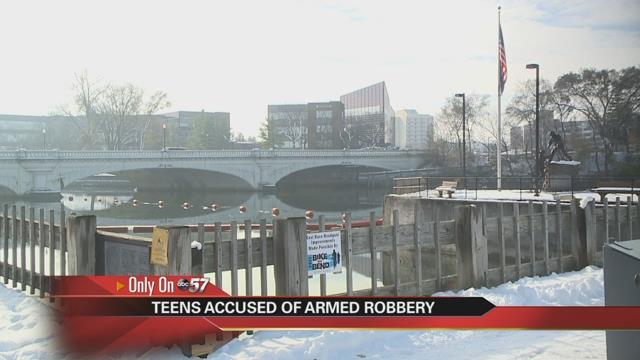 Two teens are behind bars after a robbery and police pursuit in South Bend.

According to probable cause affidavits, the crime scene sprawled all over the East Race area.

Police say two women were returning from a walk along the river to the car.

While in the parking lot, police say two young men held the women at gunpoint and robbed them of their money and eventually the car, a Toyota Tacoma.

After police arrived, they quickly saw the stolen car sitting near Corby’s Pub.

“Thank goodness it wasn’t a nice summer day where sometimes people are hanging out near the front door here, enjoying the weather,” Joe Mittiga, owner of Corby’s said.

Police say when the two young men saw them coming, they jumped out and ran, but left he car in drive.

The car then crashed into the front door of the bar while patrons were inside.

“The bar suddenly got a lot colder,” Mittiga said.

According to documents, the two suspects continued running.

Police say one went to a nearby apartment complex where he was caught.

The other jumped in the river.

Police eventually pulled him out and arrested him.

The charging documents don’t mention injuries to the two women.

Mittiga says everyone at Corby’s was ok too.
Corby's even stayed open throughout the night.

“The cops did there thing and we got everything cleaned up and i boarded up the door. The show must go on,” Mittiga said.

The suspects now face two counts of robbery and one count each of resisting law enforcement.

During their investigation police discovered the guns the suspects allegedly used were BB guns.