What Trump said about ISIS, Iran and North Korea in his State of the Union speech 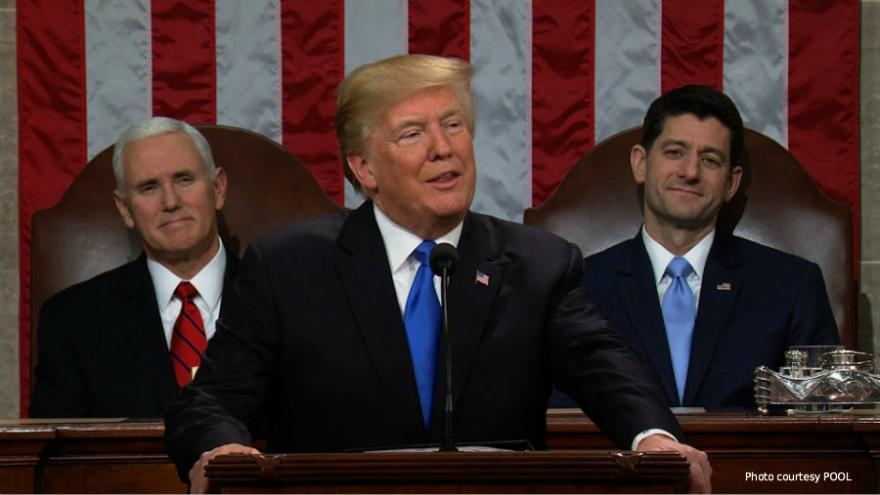 (CNN) -- US President Donald Trump's first State of the Union touched on a number of international issues, including North Korea and the battle to defeat ISIS, but he didn't offer any specifics and barely mentioned Russia or China.

The President's decision to stay clear of comment on Russia was notable, coming just one day after the US Treasury Department released a list of Russian oligarchs and prominent political figures which infuriated the Kremlin.

In his address, Trump referred to Russia and China as "rivals" who "challenge (US) interests, our economy, and our values."

Direct reference to Pakistan, a key partner in the war on terror, which Trump recently said would be subject to a reduction in US aid, was also omitted from the speech.

Here's what he did include:

One of Trump's major foreign policy successes, he says, is a decisive victory against ISIS, which until recently held swathes of territory, alongside major population centers in Iraq and Syria.

"Last year, I also pledged that we would work with our allies to extinguish ISIS from the face of the Earth," he said Tuesday.

"One year later, I am proud to report that the coalition to defeat ISIS has liberated almost 100 percent of the territory once held by these killers in Iraq and Syria. But there is much more work to be done. We will continue our fight until ISIS is defeated."

The defeat of ISIS has been a long time coming, and most of the anti-ISIS campaign took place under the Obama administration, CNN's national security analyst Peter Bergen said at the end of last year, but the Trump national security team helped to hasten its defeat.

Trump signed a new executive order Tuesday to keep open the detention facility at Guantánamo Bay, Cuba, and opened the door to sending new prisoners there.

The decision is a major reversal of his predecessor President Barack Obama's policy. Obama, failed to close the controversial high-security detention facility in his eight years in office despite campaign pledges to do so.

"Today I'm keeping another promise. I just signed an order directing Secretary Mattis... to reexamine our military detention policy and to keep open the detention facilities at Guantánamo Bay," Trump said in his speech Tuesday.

"I am also asking the Congress to ensure that, in the fight against ISIS and al-Qa'ida, we continue to have all necessary power to detain terrorists -- wherever we chase them down."

"Terrorists who do things like place bombs in civilian hospitals are evil. When possible, we annihilate them. When necessary, we must be able to detain and question them. But we must be clear: Terrorists are not merely criminals. They are unlawful enemy combatants. And when captured overseas, they should be treated like the terrorists they are."

Amid a deteriorating security situation on the ground, particularly in the capital Kabul, Trump indicated that the US' longest-running overseas conflict will continue, with US troops able to operate under "new rules of engagement."

"Our warriors in Afghanistan also have new rules of engagement," Trump said to the joint session of Congress -- although these were not spelled out.

"Along with their heroic Afghan partners, our military is no longer undermined by artificial timelines, and we no longer tell our enemies our plans."

Neighboring Pakistan, a key US partner and a decisive player in Afghanistan, did not merit a mention in Tuesday's address.

Earlier in January, the Trump administration said that it would withhold $255 million in aid to Pakistan, based on a perception that the country was harboring terrorists.

One of the Trump administration's staunchest international allies, Israel was gifted a symbolic victory late last year, when the US announced the decision to recognize Jerusalem as the capital of Israel.

"That is why, tonight, I am asking the Congress to pass legislation to help ensure American foreign-assistance dollars always serve American interests, and only go to friends of America, not enemies of America."

Why moving the US embassy to Jerusalem is controversial

Trump has persistently criticized the multilateral Iranian nuclear deal put in place by his predecessor Obama and has labeled Iran a state sponsor of terror. He has also included its citizens in its controversial travel ban.

However, he and his vice president, Mike Pence, offered encouragement to ordinary Iranians who stood up to protest a faltering economy and government corruption late last year.

"When the people of Iran rose up against the crimes of their corrupt dictatorship, I did not stay silent," Trump said Tuesday.

"America stands with the people of Iran in their courageous struggle for freedom."

He also reiterated his opposition to the nuclear deal.

"I am asking the Congress to address the fundamental flaws in the terrible Iran nuclear deal."

The threat posed by North Korea's continuing nuclear and missile technology is arguably the biggest global challenge faced by Trump during his presidency thus far.

During Tuesday's speech, Trump once again turned his attention to the country's leaders.

"No regime has oppressed its own citizens more totally or brutally than the cruel dictatorship in North Korea. North Korea's reckless pursuit of nuclear missiles could very soon threaten our homeland," he said in his address.

"We are waging a campaign of maximum pressure to prevent that from happening. Past experience has taught us that complacency and concessions only invite aggression and provocation. I will not repeat the mistakes of past administrations that got us into this dangerous position."

"We need only look at the depraved character of the North Korean regime to understand the nature of the nuclear threat it could pose to America and our allies."

Sitting in the gallery during the State of the Union was Ji Seong-ho, a North Korean defector who made it out of the rogue nation and now resides in South Korea.

Trump told Ji's story, one of a starving boy in North Korea some 20 years ago, whose limbs were run over by a train after he collapsed in exhaustion on the tracks, before enduring torture at the hands of North Korean authorities.

Trump said Ji was a "witness to the ominous nature" of the authoritarian North Korean government.