Where are the April showers? 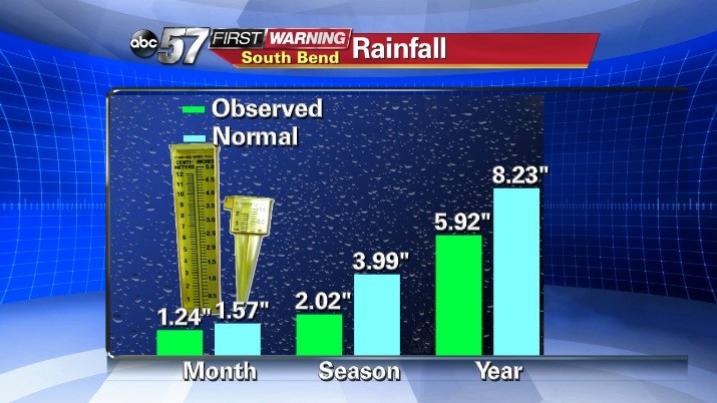 SOUTH BEND, IN- The old saying goes, "April showers bring May flowers," but the first half of April has been lacking in the precipitation department.  Take a look at Fig. 1 to the right.  This shows the observed monthly, seasonal, and year to date precipitation compared to normal.  In each category, 2015 has been in a deficit for South Bend and the surrounding area.  For this month alone, we are almost a quarter of an inch below the normal.  Thankfully, Michiana the snow pack melt in early March relieved most of the deficit, avoiding a drought this early in the year.

Not only have we seen a drier month so far, it's also been unseasonably warm.  Fig. 2 shows 13 out of the last 15 days have been at or above the normal high for this time of year (highlighted in the red boxes).  April Fool's Day started the month seventeen degrees warmer than normal with a high of 71° in South Bend and that warmer trend continued.  Also, when averaging the daily high and low temperatures, the mean temperature for the month so far has been 52.3°, 6.2° warmer than the normal.

However, it looks like this trend is not sticking around for too much longer.  A cool-down and rain are in the 10-day forecast.  Check out ABC 57 First Warning Neighborhood Weather page for continued updates.