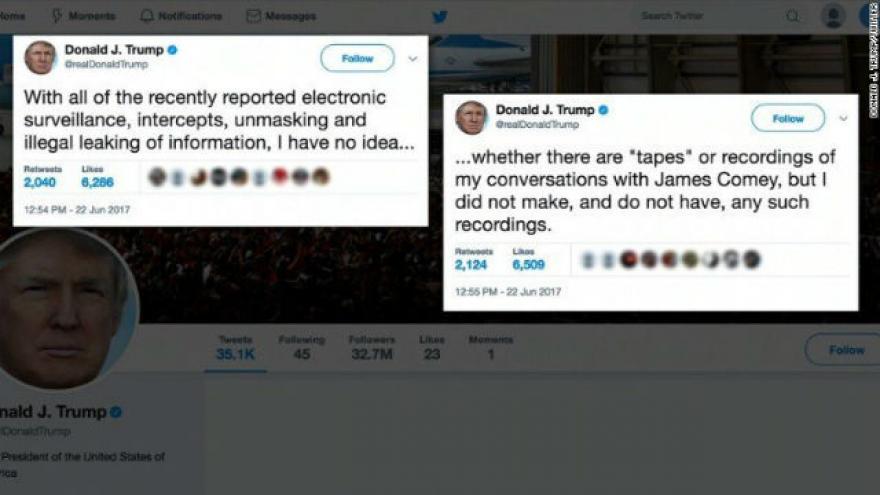 The White House sent a two-paragraph letter to the leaders of the House and Senate Russia investigations. In it, Trump\'s tweet was copied and pasted onto formal letterhead. Photo courtesy Donald Trump / Twitter

In a brief, two-paragraph letter to the leaders of the House and Senate Russia investigations, White House legislative affairs director Marc Short copied and pasted Trump's tweet onto formal letterhead.

"In response to the Committee's inquiry, we refer you to President Trump's June 22, 2017, statement regarding this matter: "With all of the recently reported electronic surveillance, intercepts, unmasking and illegal leaking of information, I have no idea whether there are 'tapes' or recordings of my conversations with James Comey, but I did not make, and do not have, any such recordings," wrote in the letter on Friday.

On May 17, Trump set off a flurry of speculation by sending a tweet that seemingly indicated he might have taped conversations of his conversations with the FBI director, who he later fired, citing the Russia investigation

"James Comey better hope that there are no 'tapes' of our conversations before he starts leaking to the press!" Trump tweeted. Leaders of the House and Senate Russia investigations had asked Trump to produce the tapes, if they existed.

The four leaders of the investigations, Reps. Michael Conaway and Adam Schiff and Sens. Richard Burr and Mark Warner, were not immediately available for comment Friday evening.

However, Schiff said Thursday that Trump's tweet alone would not be enough, and that he had more questions, including whether the President was trying to threaten Comey with his May 17 tweet.