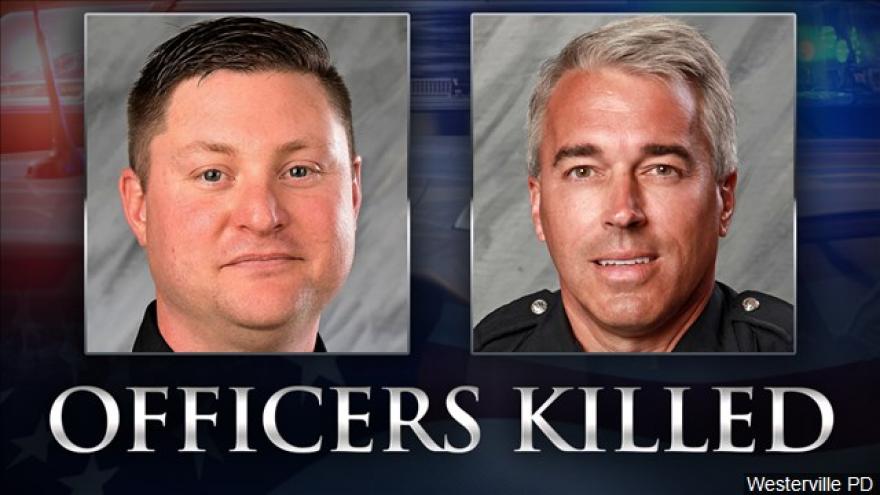 Westerville Police Officers Eric Joering, 39, and Anthony Morelli, 54, were shot as they entered an apartment in Westerville, Division of Police Chief Joe Morbitzer said. Westerville is a northern suburb of Columbus.

"Both officers gave their lives in the protection of others," Morbitzer said through tears. "Those are true American heroes."

The suspect, Quentin Lamar Smith, was hospitalized and taken into custody, police spokeswoman Christa Dickey said. On Sunday, he was charged with two counts of aggravated murder.

The 911 caller was identified as the suspect's wife, Candace Smith. Police records show that officers previously visited the Smith home for reports of domestic violence.

'My husband ... shot the police officers'

In a 911 call around noon Saturday from Candace Smith's phone, a stifled sob is heard before the line abruptly drops, according to recordings released by the City of Westerville.

When an operator calls the number back, more sobs and wails can be heard before the line drops again. In another call about 10 minutes later, Candace Smith tells the operator she is hiding in the bushes outside their home. She expresses fear for her one-year-old daughter, who she says is in the apartment with her husband.

Officers were dispatched to the Smith home after a record search indicated that officers visited the address in 2017, the recordings reveal.

On September 14, 2017, Candace Smith called police reporting that while her husband was moving out, he was drunk and "doing something to her car," according to an incident report released by the city. He left without incident, the report says.

Then, on November 29, 2017, Candace Smith visited the Westerville Police Department to inquire about protection orders, according to another incident report.

She told police that she was not getting along with her husband, and that when she threatens to leave he tells her that he will kill her, their daughter and himself, the report says. She left the department to pick up her daughter from day care without taking action against him, the report states.

The officer who responded to the scene recommended that Candace stay with her daughter in a different part of the home.

"Both were advised that if they started arguing again, they could contact us," the report says.

'Pillars' of the department

Joering had been with the department for 17 years. Morelli was a 30-year veteran of the force, the chief said.

One officer died on the scene and one died at the hospital.

"This was their calling and they did it right. They knew how to do policing the right way," he said.

"They were pillars in our department."

President Donald Trump expressed condolences on Twitter for the officers' families and the department.

Ohio Gov. John Kasich, who is from Westerville, pledged his support for the town and its police department. Westerville is a northern suburb of Columbus.

"The finest among us are those who risk it all everyday for our safety, and Officers Anthony Morelli and Eric Joering were those people. Their deaths are a terrible tragedy," he said.

Eleven US law enforcement officers have been killed by gunfire this year, according to the Officer Down Memorial Page, a nonprofit dedicated to remembering those killed in the line of duty.