Will the Sports Illustrated cover jinx the Irish? 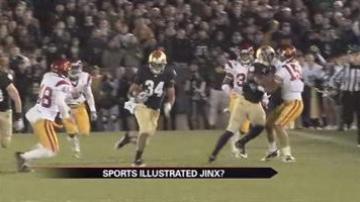 SOUTH BEND, Ind. -- There's a tricky history between the famous sports magazine and the team who graces the cover. This week Sports Illustrated chose Notre Dame and the question remains: Is it good PR or the beginning of a bad weekend?

Then there's Notre Dame where superstition and Sports Illustrated go back to 1993. The Irish were featured on the magazine as No. 1 in the nation. Then, the next week their big loss to Boston College stole the show.

So is this week's cover an omen of an unlucky weekend ahead? Or will the Irish put an end to the jinx by beating USC and earning a spot in the national title game?

The game is this Saturday on ABC57 in prime time.