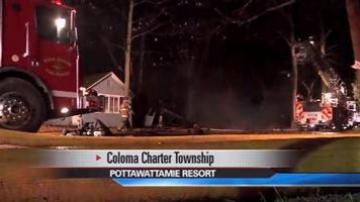 BERRIEN COUNTY, Mich. - At least 50 firefighters responded to a massive fire at the Pottawattamie Resort on Sunday night.

The resort is located on Arbor Avenue in Coloma Charter Township.

It took crews about three hours to get the fire under control.

The North Berrien Fire Captain told ABC 57 they had to bring in about 5 tankers of water to fight the fire in the strong winds. He said that amount of water would normally be used to fight a warehouse fire.

At least 7 or 8 departments were called out to help. Crews said they just started calling any nearby departments they knew could help.

One firefighter was taken to the hospital, but was stable as of Sunday night.

Crews said there was a person inside the cabin that initially caught fire and told crews he heard a spark and saw flames.

The winds were so strong the embers flew about three hundred feet or so and caught another nearby cabin on fire, but fire crews quickly got control of it.

The fire is under investigation which could take a couple days.