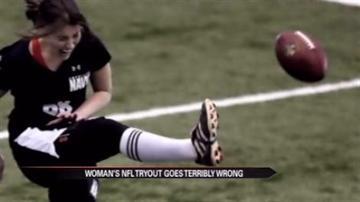 It was the thud heard around the NFL.

Last week ABC57 told you about Lauren Silberman who was trying to kick her way into sports history.

She was the first woman to get a shot at the NFL but her try-out was a blunder.

Now women across the country are worried this is a setback, especially one woman who once played professional football.

"My heart sunk into my stomach when I saw the kicks," said Katie Hnida, former pro football arena kicker. "This is not good for Lauren. It’s not good for any of us."

Katie Hnida was the first woman to score a point in a division one football game and even played in the Arena Football League.