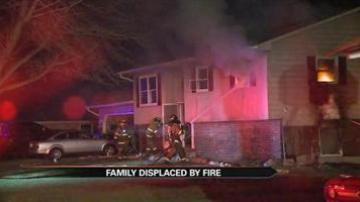 SOUTH BEND, Ind. -- A South Bend family is without a place to call their own after a fire broke out in their home.

It happened around 11:30p.m. Tuesday night on the 58000 block of Pam Street right off Crumstown Highway.

The home is owned by a couple with a small child and dog. They escaped from the burning house unharmed thanks to their working smoke detectors.

Crews say the fire began on the lower level and quickly spread throughout the home. They faced adversity when the floor began to collapse underneath them while they were fighting the fire inside the house. It forced crews to evacuate the home and try to extinguish the flames from outside the house.

Firefighters say the house isn't a total loss, although about 75% of the structure will need repairing after sustaining excessive smoke and water damage as well as the collapsed floor.