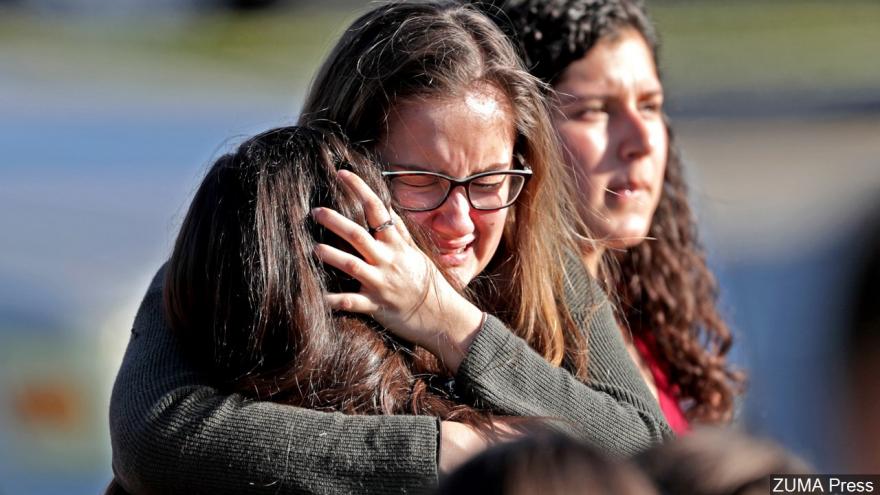 (CNN) -- From his hospital room in Florida, a student wounded in the Parkland school massacre plans to sue his school district and the Broward County Sheriff's Office, his attorney said.

"The failure of Broward County Public Schools, and of the Principal and School Resource Officer to adequately protect students, and in particular our client, from life-threatening harm were unreasonable, callous and negligent," attorney Alex F. Arreaza wrote in a notice of intent to file claim.

But the sheriff's office has come under criticism because deputy Scot Peterson, an armed school resource officer, stayed outside the school as the massacre was unfolding inside, Israel said.

Peterson has since resigned from the sheriff's office. His attorney said the sheriff's account of Peterson's actions is "at best, gross over-simplification."

While Anthony remained hospitalized, the Broward County school board met Tuesday and denounced assault-style weapons like the one gunman Nikolas Cruz allegedly used to kill 17 students and teachers.

Allowing teachers to be armed on a volunteer basis has been the primary sticking point of a bill that passed the Florida Senate on Monday and is being considered by the Florida House on Tuesday.

If enacted, SB 7026 would raise the age to buy a firearm from 18 to 21, require a three-day waiting period for most gun purchases and ban the sale or possession of bump-fire stocks.

The Senate made changes to the bill to exclude those who "exclusively perform classroom duties as classroom teachers" from being allowed to be armed.

But teachers of a Junior Reserve Officers' Training Corps program or current service members may be armed, as well as current or former law enforcement officers

Under the proposal, school staff members who could be armed must complete 144 hours of training and meet other criteria. The program would be voluntary, implemented only if the sheriff's department and school district agree. School personnel would not be required to participate.

Florida Gov. Rick Scott took issue with some aspects of the proposal and "is against arming teachers," his spokeswoman Lauren Schenone said.

"Obviously, this amendment (to exclude some staff members from being allowed to be armed) is a step in the right direction," she said. "The governor will review the final bill before he makes a decision"