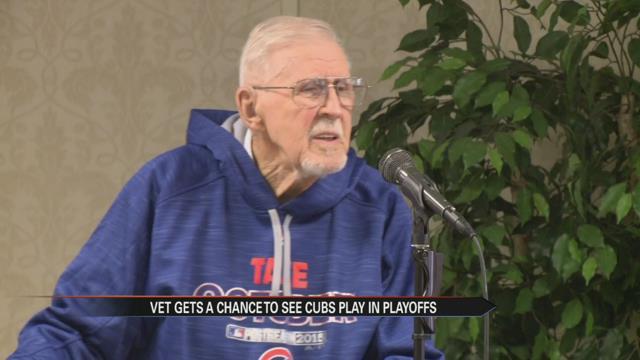 After being injured in World War II, Cubs fan Bill Madden missed his chance to see his favorite team in the postseason. But today, thanks to generosity of a Notre Dame grad, Madden will get that chance.

It's been a 70 year wait for Cubs fan Bill Madden, hoping for a chance to see his favorite team in the fall classic. Madden was injured in combat in Iwo Jima during World War II. The Cubs just happened to be in the World Series at the same time.

Injured servicemen like Madden had an opportunity from the club to attend the World Series game. But the Navy stepped in. There were strings attached.

"They decided we would have to work for the tickets. And we had men in casts and crutches," said Madden.

With an arm in a sling and numerous injuries, Madden didn't feel up to the task. So he and his brothers in arms said they would pass. but whether it was Bartmans fault or the goat, postseason success was rare.

But decades later opportunity rang through in the form of a phone call.

Notre Dame grad David Walker of the DC based coalition to salute Americas heroes heard about Madden and said he couldn't promise a World Series. But he could get him to game 4.

"Instantly I could see this was the Cubs fan. Sharp as a tack. Knows the history. And a very deserving to go to a game like this," said Walker.

"It was great talking to him. Sounded so sincere," said Madden. "Not quite a World Series, but next step. It will be wonderful, win or lose."