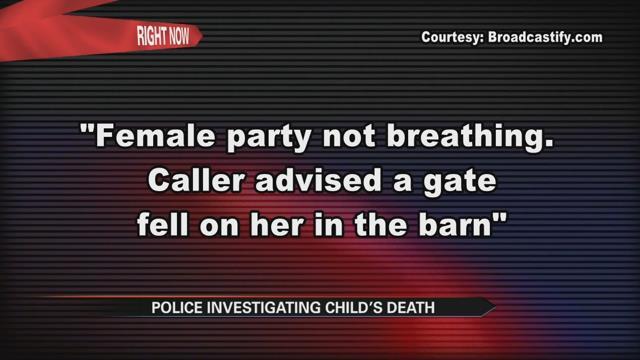 A Michiana family is reeling after a little girl died  in what looks to be a tragic accident.

County police confirm the 9-year-old girl died on Tuesday evening, at her family’s farm near Wakarusa on Martindale Road.

ABC57 is told police and the first responders were rushing there on Tuesday and  they were told the family was trying to revive her.

“Ultimately, those efforts and the effort of first responding fire fighters and paramedics were unsuccessful. The child was ultimately pronounced dead at the scene,” said Bill Thompson, Assistant Chief County Police.

St. Joe County Police received a call on Tuesday evening around 5:15.  Nine-year-old Chelsie Hill was unresponsive and not breathing.

“It was an extremely tragic accident,” said Thompson.

According to Thompson, the investigation seems to indicate that Chelsie was trying to cross over a gate on the family’s farm.

“The gate somehow fell over and the child fell awkwardly in such a way that she became injured to the point where she ultimately passed away from her injuries.”

Thompson says she was found by her older brother. Hundreds of feet away, the Martin family says they heard the aftermath.

“The children actually heard it. We were inside getting ready for supper. We just wondered if it was an accident,” said a member of the Martin family.

This mother decided to remain off camera, but tells ABC57 she has a nine- year-old of her own and can only imagine what it feels like.

“I definitely tell my sympathies to them and hope they can go on and accept it as something that god planned even if it’s not something they planned,” she said.

Thompson continued by saying, “It’s the kind of grief most folks can’t even understand or appreciate to any degree, especially in the holiday time of year and everything else. It was just something that was obviously having an impact.”