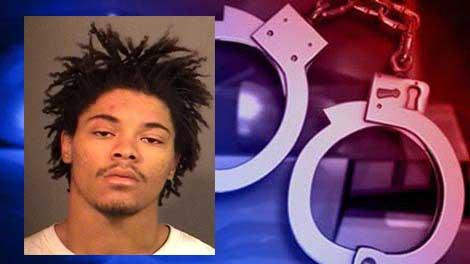 A man who is accused of shooting at a woman after he attempted to break into her home has been charged, according to the St. Joseph County Prosecutor's Office.

According to the probable cause affidavit, South Bend Police were called to the victim's home on S. High Street around midnight January 24.

The victim told police someone knocked on her door, so she placed her foot in the way so the door wouldn't open all the way, then opened the door a little.

She said she saw a man outside she didn't recognize and he was carrying a handgun.

When she tried to close the door, the suspect identified as Reynolds, put the gun inside the home and began firing, according to reports.

The victim got the door closed and rand down the hall to call for help. She said four more shots were fired at that time.

Police said they found several spent projectiles in the home and shell casings outside the door and holes in the door.

The victim gave police a description of the man who fired shots at her.

Officers who were in the neighborhood investigating located Reynolds. He was detained and police found a .380 semi-automatic handgun in his possession, according to the probable cause affidavit.

The victim was shown a photo array of suspects and she picked out Reynolds as the man who tried to break into her home.

Reynolds spoke with police and told them he had checked out the victim's apartment and admitted to breaking in, according to reports.

Police said Reynolds does not have a license for the handgun and was convicted of a felony in December 2014 in Elkhart County.

Reynolds is on probation for that conviction and there is an active warrant for his arrest for a probation violation on the same conviction.

The state requested and received a higher than standard bond in the case.