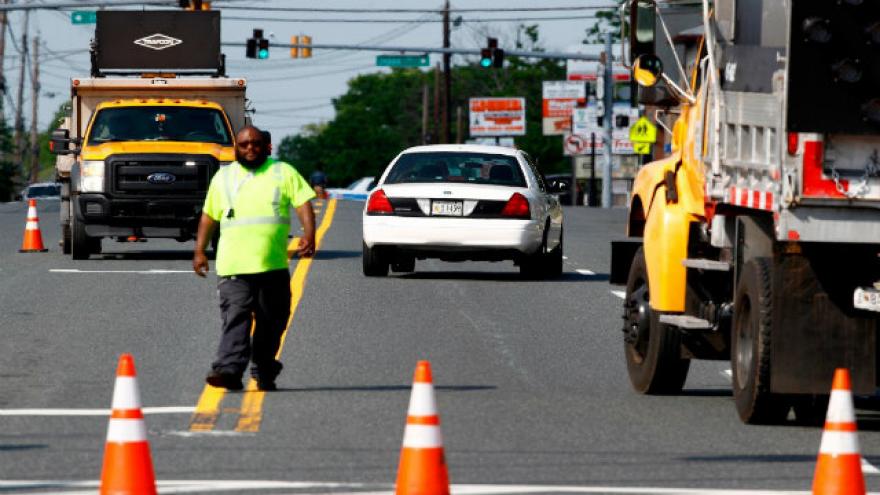 The suspects are still at large, according to Baltimore County Police Chief Terrence Sheridan.

The incident took place around 2 p.m. when the officer responded to a 911 call about a possible burglary with four suspects, Sheridan said.

While the governor said the officer died from a shooting, the police chief said the nature of the officer's injuries are unknown until the medical examiner does an autopsy and determines a cause of death.

The officer was taken to the hospital, where she was pronounced dead at 2:50 p.m., according to CNN affiliate WJZ-TV.

Sheridan said the officer was wearing an activated body camera that investigators are examining.

"We are now investigating this as a homicide," Sheridan said at a press conference Monday evening.

The suspects are believed to be armed and dangerous.

Sheridan said the officer was a four-year veteran "whose life was cut short." Authorities have not released her name.

"It's terrible, we're seeing something in this country today that we've never seen before. We're seeing police officers assaulted," he said, adding that the number of officers dying in the line of duty and by gunshots has risen.

"This is a bad time in the United States for law enforcement," Sheridan said.

"We are deeply saddened to learn of the passing of a Baltimore County Police Officer after she was shot in the line of duty today," he tweeted. "Our prayers go out to this brave officer's family, @BACOPoliceFire, and the Baltimore County community."

The county's police and fire department tweeted that Perry Hall Elementary, Seven Oaks Elementary and Gunpowder Elementary were subject to the alert. Baltimore County Public Schools said in a statement that the alert status placed on three elementary schools does not involve a lockdown.

"An Alert Status is less serious than a lockdown," the statement read. "Alert Status is used during a community emergency that takes place outside of the school building. It is intended to secure access to the building. A Lockdown is for use to protect people in the building from potential dangers either inside or outside the building."

Students and staff were safe and supervised by staff, according to the school division. The division said parents were able to pick up their children around 7 p.m. Buses were not taking students home.