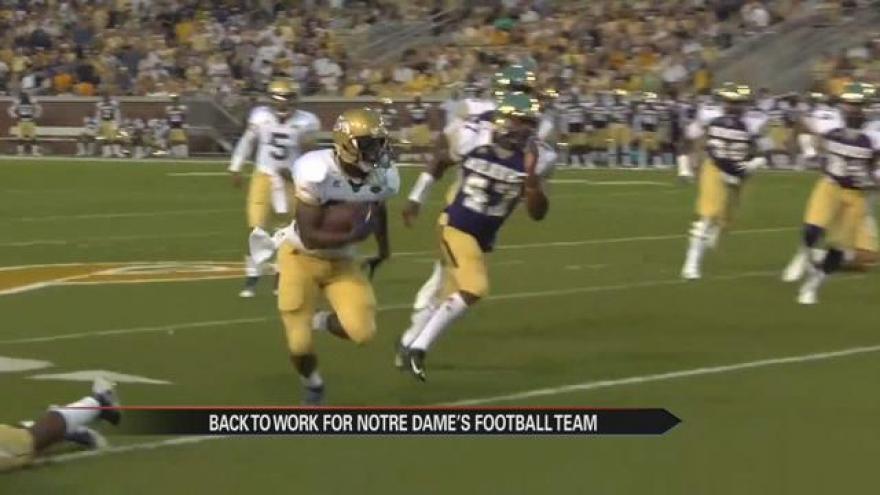 Coming off of a thrilling win on the road at Virginia, the Notre Dame fighting Irish are back to work this week. And Head Coach Brian Kelly says preparing to play Georgia Tech could be one of their greatest challenges of the season.

Coach Kelly calls the Yellow Jackets an outstanding team. They've really been on the nations radar after last post season's thrashing of Mississippi State. And while the Irish may have won their last game against Virginia, the coach says his team will have to be sharper if they want to go 3-0.

"We know what's in store for us. We are excited for the challenge," said Coach Kelly. "Prolific scoring, and just in the past year amazing numbers offensively."

The Yellow Jackets are one of the most dynamic offenses in the country. They've set an ACC mark for the most points in 2 games with 134. And over their last 4 games they've averaged 54.4 points. and it's the type of offense they run, a triple option attack, that has Kelly concerned with how to stop it.

"There has to be some discipline. There gotta be, clearly some athleticism as well. But by and large they have to be able to pick up the schemes we are trying to put together," said Kelly. "If you're lost out there, you could be the greatest athlete in the world and of it doesn't make sense to you, you could be a liability."

A high powered offense isn't the only challenge the Irish will face. They'll have to keep up point for point with the Yellow Jackets with key offensive players gone.