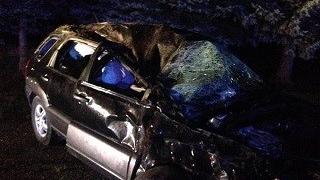 A man has been hospitalized with lacerations after crashing his car in North Liberty early Tuesday morning.

St Joseph County Police say the driver might have fallen asleep at the wheel shortly before 5 a.m. when his car swerved off State Road 23 and smashed into a large boulder in someone's front yard.

The boulder split on impact, sending rock and vehicle debris all over the roadway.

The homeowners called police when they heard the crash.

Alcohol is not believed to be a factor, but police say the man may have been driving too fast.

The driver was wearing a seat belt, and police say it likely saved his life.