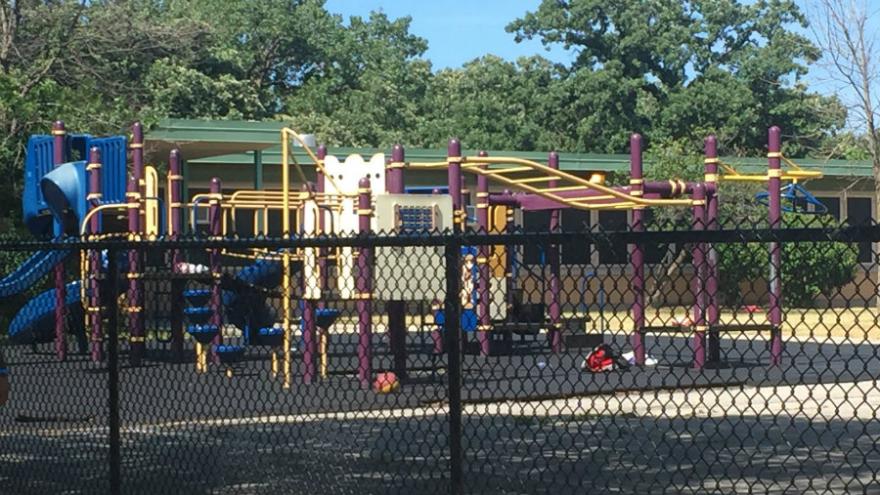 (CNN) -- After a shooting at an elementary school on the South Side of Chicago wounded two girls, police Superintendent Eddie Johnson said he's sick of the gun violence in his city.

"This goes to show you again that the violence in this city is completely unacceptable," Johnson said after the tally of people shot in Chicago in the past 24 hours rose to at least 22. At least two people died.

"We stand here now looking at a 7-year-old and a 12-year-old being shot at an end of the year school picnic, it's just ridiculous," he said. "It angers me that these little children cannot grow up in a neighborhood and not think that gunfire is the norm. It is not OK."

The girls were hospitalized with non-life-threatening wounds. The 7-year-old was shot in the thigh and the older girl was shot in the hand, police spokesman Larry Langford said. Though the police chief said the girl was 12, Langford gave her age as 13.

A very upset Mayor Rahm Emanuel spoke to reporters outside of the hospital where he met with family members of the two girls hit by bullets.

"Kids were out on a playground, enjoying their childhood, the end of the school year, having a barbecue and these gang bangers are out shooting other gang bangers with no regards to the consequences," Emanuel said. "There is no person in Chicago who is not disgusted by this incident."

Catherine Jones, a parent, told CNN affiliate WLS about the scene she encountered upon arrival at Joseph Warren Elementary School.

"My daughter just called me crying, saying they were shooting at the school and she couldn't find her brother and everybody ran, and when I got here no one knew where my child is at, no one knew where my son was at," she said. "So I had to run back and forth from building to building just to find my son."

Johnson said other children, former students who had been kicked out of the school picnic, were the targets of gunmen around 1:45 p.m. CT.

The former students were standing on a nearby corner when shots were fired from a vehicle. The targets of the gunfire ran onto the fenced school playground where the two girls were hit.

Police were nearby and tracked down the vehicle -- which had been stolen -- and detained some suspects, Johnson said.

Authorities also want to speak with the targets of the gunfire, he said. Johnson didn't say whether police thought the suspects or targets had ties to gangs.

The school has about 300 students from pre-kindergarten to eighth grade. The Chicago Public Schools website describes it as "a magnet cluster school with a focus on math and science."

The Chicago school year ends Tuesday. It is rare for students to be shot on a school campus, Chicago Public Schools CEO Forrest Claypool said.

"Our schools are secure. They are very best place for our children to be, both during school and during after school programs," he added.

He said the system's security team will review the incident to see whether changes need to be made.