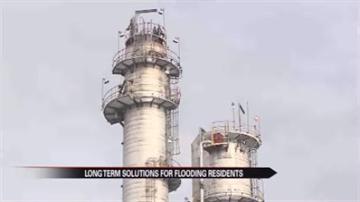 SOUTH BEND, Ind. -- Finally a solution for Rum Village residents. Flooding has plagued residents for six long months and it was all because South Bend's former ethanol plant shut down.

Right now one pump at the plant is pumping four million gallons of water out of the ground everyday, but that is only a short-term solution that is currently costing the city $12,100 a month.

Much of the debate about what to do for homeowners living near the former ethanol plant centered around its fate, as the city works to find a new operator to buy the property.

Yet, on Monday city officials said they are not going to wait for a company to purchase the plant, instead they city decided to install three vertical wells and possibly a forth in the affected neighborhoods.

This solution will allow the city to shut off the pump currently running at the plant, while still making sure that ground table water levels are low enough that neighbors’ homes will not flooded.

Construction on the first test well started Monday and will be completed by May 31st. Testing will be done on the well and a report issued to city officials. Then the city will begin the permit and design process.

"We would like to do it tomorrow if we could, but we have to go through the necessary due diligence and design period and also the public bidding process," said Department of Public Works Director Eric Horvath. "That all takes some time, but we will get this done as quickly as we can."

Once that process is completed, construction on the other wells will begin roughly August 21st. City official say construction on all the wells is expected to be complete by October 21st.

"Having a well system in place where the homes can be tied to the wells and not whether or not there’s an operator or not an operator gives the neighborhood stability," said Davis.

City officials say this will save the city a considerable amount of money in the long run. Right now, it is costing the city 10 times as much as it will to have all the wells operating.

The city says, eventually, homeowners will be responsible for the electric costs for the operating wells, but say residents will only have to pay a small monthly fee.