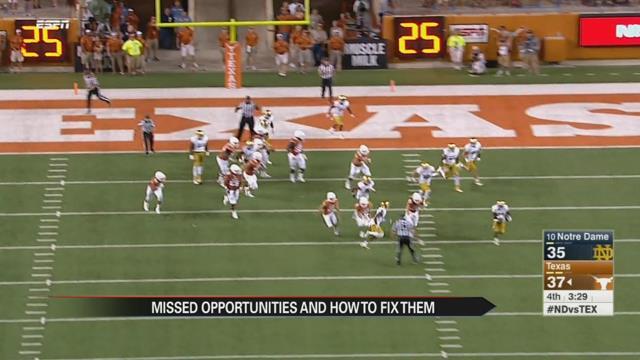 According to ESPN, it was the highest rated opening weekend game since 2005.

But it doesn't soften the blow for the Irish and Head Coach Brian Kelly, who answered questions today about the disappointing loss and upset to the un-ranked Texas Longhorns in Austin.

Kelly says missed opportunities and a lack of key stops made the difference.

“The guys fought back, got the lead and you know, played some pretty good defense and gave up that last drive with 3:52 or 5:23 to go and had a chance to get off the field and hold them to a field goal but missed a tackle,” says Kelly.

Kelly also talked about the status of ND safety Avery Sebastian who suffered an injury during second overtime and stand-out wide receiver Torii Hunter Jr., who left the game in the third quarter after a hard hit to the head in the endzone.

“Too early to tell. Both of them sustained head injuries, so they'll go through our battery of tests and we'll see how they are today and proceed from there. Really too early to tell,” comments Kelly.

Despite the upset, the Irish are still optimistic about the season and the season opener against Nevada just five days from now.