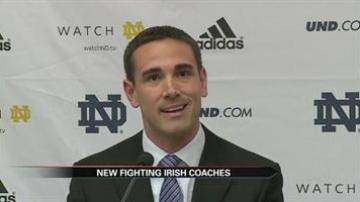 Mike Denbrock has been with the Irish and Brian Kelly since 2010. But Matt LaFleur is new to Notre Dame football and says in his mind each player is starting with a clean slate this season.

LaFleur comes to Notre Dame from the Washington Redskins after four years as a quarterback coach.

"Great relationships, footwork, body position, balance. Those were the words that resonated in the interview and Matt hit each and every one of those," said Kelly.

Denbrock was promoted from his passing game coordinator and outside wide receivers coach position-to take the reins to the offense this season.

"A great developer of football at all positions. He's coached virtually all of the positions for me. A great understanding of the offense we want to run," said Kelly.

"It's my responsibility to make sure this thing looks the way Coach Kelly wants it to look. Have the menu if you will, available to him that he feels like he needs on Saturday to be successful offensively," said Denbrock.

The question many are asking-how will these coaches mesh with returning quarterback Everett Golson?

Kelly says he has two talented quarterbacks vying for that first-string spot this season.

"We're always in this rush to move to Everett, but I want to caution everybody that we have, I think, a very good quarterback in Malik Zaire as well," said Kelly.

LaFleur says he's up for the challenge of finding the best man for the job.

"You have to find out what makes each guy tick and that's what I'm going to try to do over these next few months," said LaFleur.