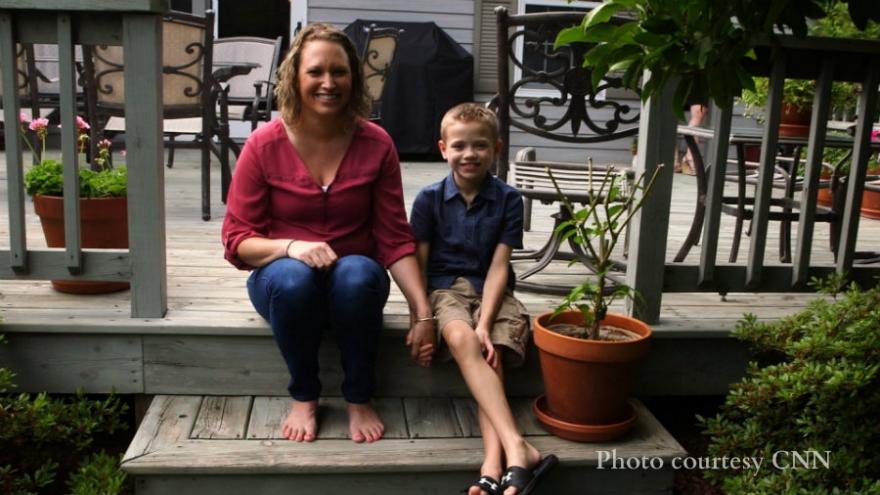 (CNN) -- One cold February evening, Kristi Goll pulled up Facebook on her computer to post a desperate plea: Please get tested to see if you're a match to be able to donate one of your kidneys to my 8-year-old son.

"This would be the very best gift we could ever receive," she wrote.

Jackson Arneson, her little boy who loves swimming and all things space-related, might not make it through another Wisconsin winter, doctors told her. He was born with a condition called posterior urethral valves, which sometimes causes the patient's kidneys to gradually lose function every year until they stop working completely. He managed to avoid dialysis, but now, his best hope to stay healthy was to get a living kidney donor, with type O positive blood, and as many matching antigens as possible.

Family members checked to see if they were a match, but no one was. So, Goll, refusing to give up hope, turned to Facebook. It was a one-in-a-thousand chance -- finding a perfect stranger who could match Jackson's needs -- let alone someone who would be willing to give up a part of their body to someone they didn't know. The average person waits three to seven years for a kidney donation, and someone like Jackson, who can only get donations from people with a certain blood type, would wait much longer.

The Facebook post Goll wrote in February was shared more than 1,400 times. People contacted her and tested their blood. But after about a month, there were no matches.

To serve and protect

Goll gets goosebumps, still, when she recalls the day Officer Lindsey Bittorf came into her family's life.

"If roles were reversed and it were my kid, I would move hell and earth for my kid, too," Bittorf said.

Bittorf is an officer with the Milton Police Department, not far from Jackson's hometown of Janesville, Wisconsin. She began the process of testing to see if she would be able to donate to Jackson -- but because of patient privacy laws, Jackson's family couldn't be notified about her progress and results.

A mailed-in kit tested Bittorf's blood type. Then, she spent an entire day getting blood drawn, scans, psychological consultations -- all to make sure she would be a good donor for Jackson.

Dr. Didier Mandelbrot, a transplant nephrologist with the University of Wisconsin Hospital, explains the ability to carefully vet someone's health was part of why getting a living donor was so important for a case like Jackson's -- so doctors could make sure any kidney coming to him would work with his body, and be the healthiest possible.

Then Bittorf got the good news: She was a near perfect match for Jackson. Doctors looked not only at her blood type, but also her antigens to see how high a risk Jackson had of his body rejecting Bittorf's kidney. Mandelbrot said specialists look at six antigens to see if there are any matches. Bittorf and Jackson matched three out of six.

"(The chances of) a complete stranger having any matches is pretty low," Mandelbrot said.

Because Jackson and his family were unaware of Bittorf's test results, she decided to surprise them with the good news. One day in May, she worked with Jackson's grandparents to lure Jackson and his mother over to their home. Bittorf showed up in uniform, and Goll was surprised when she found an officer standing outside the door, holding two wrapped presents.

Bittorf knew what she wanted to say to Jackson and his family even before she found out she was a match.

From the day Bittorf saw that Facebook post, there was never a thought of backing out. Goll instantly knew she was her son's hero.

"She was just completely in it and that's what I knew we needed to find this for Jackson," Goll said.

Bittorf's resolve to help Jackson was similar to her drive to become a police officer: She simply wants to help people.

"You don't get to save everybody but this is one life I can say that we got in front of and got to save," Bittorf said.

On June 22, Jackson is lying in a hospital bed at American Family Children's Hospital in Madison. He is grinning, with two thumbs up, his hospital gown lifted to show a smiley face drawn on with marker, showing the spot where he would be cut open, to make way for Bittorf's kidney.

"He wasn't scared at all," Goll said. He was just the bravest kid."

Bittorf, meanwhile, was at the adjoined University of Wisconsin Hospital next door. Her kidney was removed and brought over to Jackson, who had a four-hour surgery and nearly two weeks in the hospital.

Both surgeries were successful but both Bittorf and Jackson face risks.

Jackson will spend the next year getting regularly tested to make sure his new kidney is adjusting to his body. He will have to take anti-rejection medication to prevent his body from rejecting the kidney, and monitor how much water, sugar and salt he consumes. But even with the risks of the transplant, Mandelbrot said, a transplant is still a better option than having to go through dialysis.

Bittorf, on the other hand, will only have one kidney to rely on. She'll get checked annually to make sure her remaining kidney is working well, but will otherwise lead a normal life. The biggest risk for her is the off chance that her kidney begins to fail. But to Bittorf, that risk is worth it.

"They do a risk assessment during this -- it was a .03% risk to my life to donate," Bittorf said. "And I take bigger chances than that going to work (as a cop) every day."

Joined at the hip

Since the families met in May, not a day has gone by when the two mothers haven't spoken in some way. They text. Goll gives Bittorf rides, because doctors won't let her drive until she heals more. And they remember birthdays.

Jackson turned 9 a few weeks after the surgery, and the families joke that Bittorf doesn't have to get him a birthday present -- ever -- because she's already given him the greatest gift. But to Bittorf, donating to someone who happened to live so close to her was a gift unto itself for her.

"I've met other donors that have donated to people from across the country. I love that he's in my home town, he's in my area and I can harass him anytime I want," she jokes. "I love this kid as if he is my own. And he's great with my own child."

The two wonder if any of Bittorf's characteristics will transfer to Jackson now that he has a part of her body inside him. And they have their own inside jokes.

"I tell him to hug me on my left side with his right side so I can feel whole again," Bittorf laughs, as she pulls Jackson closer to her.

He tells her he promises he'll take good care of her kidney.