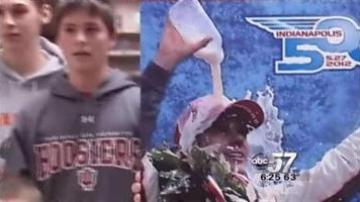 INDIANAPOLIS -- Attention, race fans! The ticket for this year's Indy 500 was unveiled on Tuesday.

The artwork shows two-time champion Dan Wheldon in victory lane -- a bittersweet image, since he died in a crash last October.

The artwork was unveiled at Avon Middle School.

A guidance counselor won an essay contest on why his seat at the speedwat is the best.

"It's neat.  Dan was great guy, loved the speedway and it's an honor," said Paul Quirke, the contest winner.

You can watch the race right here on ABC 57.