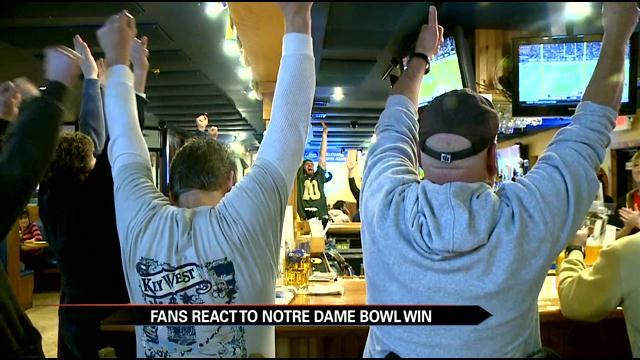 The nail biting, last minute win against Louisiana State University had fans on the edge of their seats tonight.  If it wasn't tied up, it was back and forth the entire game, as the Notre Dame Fighting Irish took on the LSU Tigers in the Music City Bowl.

The Fighting Irish came out strong, with Malik Zaire in his first career start, leading the team down to the end zone.  It was a start fans, seem to agree with.

"Zaire, our backup quarterback, he should have replaced Golson in the beginning of the year," says fan Kyle Lindcy.

And with just seconds left in the game, it was senior kicker Kyle Brindza who helped finish the season strong with his game winning 32-yard field goal, that put the Fighting Irish ahead 31-28.

But after a couple flubs earlier this season, that last second field goal had some fans worried.

"I wasn't sure if we were going to win at the end, I was very nervous," says fan Leslie Crane.

And that redeeming win has fans happy with how the season ended, and now ready for next year.