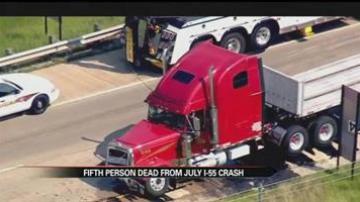 CHICAGO -- Another person has died in the semi-truck crash on I-55.

Osburn is the fifth person to die from the crash.

Four women were killed when the crash happened on July 21st, and three other people were injured.

A semi-truck driver was speeding in a construction zone when it quickly changed lanes and set off the chain reaction involving two cars and a van.
Share this article: