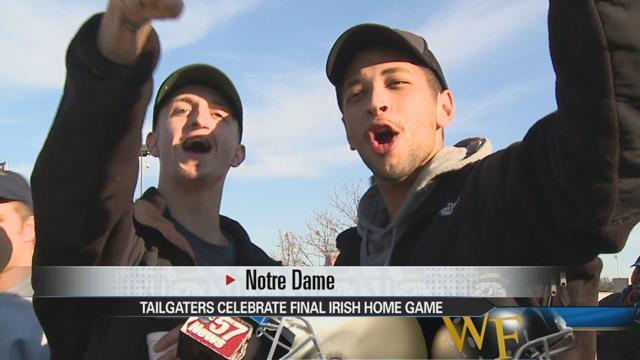 The Fighting Irish fans filled the lots outside the football stadium on Saturday as they celebrated the final home game of the season.

If you could only say one thing to describe the fans of the Fighting Irish, dedicated might do the trick. Thousands of fans come out to tailgate for every home game.

“South Bend without tailgating would not be South Bend,” said student Kessa Palchikoff.

Fans park their cars, pour their drinks, and party with their Fighting Irish family.

“Notre Dame definitely has that feel where everyone is a family. So I feel like whether I’m at my tailgate, or a random tailgate at Row 12, I’m still just as much at home,” said student Kat Brown.

Home. With thousands of family members donned in green, blue, and gold.

They may be new people, but with the same goal in mind they feel a lot like family.