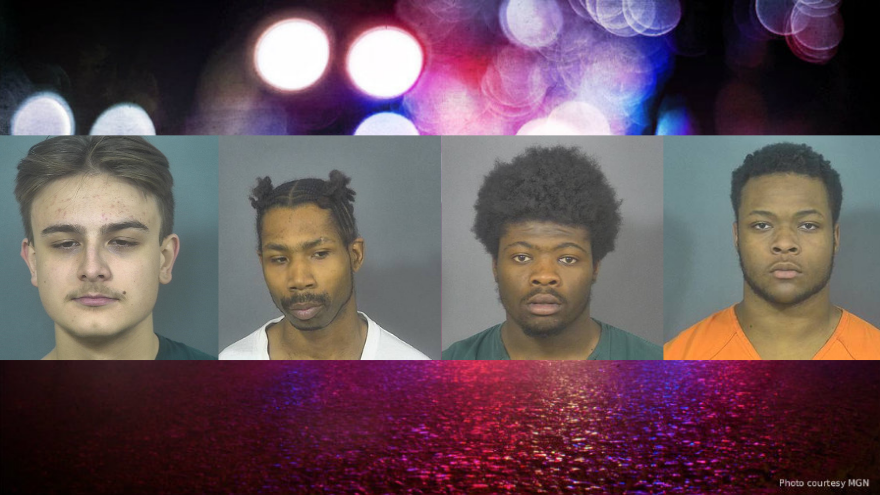 (Left to right) Kyle Doroszko, Joe Nelson, Jeremiah Williams, and Atlantis Branch.The fifth mugshot is not available as the suspect is a juvenile.

Atlantis Jay Branch, 17, was arrested on Wednesday evening and charged with felony murder, attempted robbery and a firearm sentencing enhancement.

Jeremiah Jerome Williams, 19, was arrested on Thursday morning and charged with felony murder and attempted robbery.

Joe Nelson III, 31, was arrested on Thursday afternoon and charged with attempted robbery.

All three are being held in the St. Joseph County Jail without bond and are due in court on May 6.

Kyle Doroszko, 18, was previously arrested on April 30 but was formally charged with murder and a firearm sentencing enhancement on May 2. He is due in court on May 3.

A fifth person, a 17-year-old male, was previously arrested and detained in the Juvenile Justice Center on preliminary suspicion of assisting a criminal, however, no delinquency petition had been filed as of May 2.

According to the probable cause affidavit, on April 28, around 10 p.m., officers responded to a call about a man lying in the road on William St. just north of Marion St. The man, identified as 19-year-old Traychon Taylor, was unresponsive and suffering from multiple gunshot wounds.

Taylor was pronounced deceased at a local hospital. An autopsy ruled his death to be a homicide.

A CMHU investigation found surveillance video that showed an interaction between the four occupants from a silver car and a small SUV occupied by Kyle Doroszko and a male juvenile while parked in the back lot of a bar located at William and Marion, court documents said.

Branch was holding a firearm when approaching the SUV but the SUV sped off with Taylor still inside of it, court documents said.

During his statement to police, Doroszko gave multiple versions of the night’s events. Eventually, Doroszko said that he and his friend in the SUV were meeting the occupants of the silver car for a marijuana purchase and “maybe a gun,” but it became an attempted robbery when Taylor tried to take the marijuana and backpack from Doroszko, according to the probable cause affidavit.

While executing a search warrant at Doroszko’s home, officers found a safe in his room with thousands of dollars in cash and a Glock handgun with the same caliber as some of the ballistic evidence gathered from the scene of the homicide.

In his statement to police, Nelson told police he had picked up Williams and Taylor, who he is related to, because they asked for a ride. They picked up Branch and at some point, decided that a marijuana purchase would happen but they would actually rob the marijuana sellers in the bar’s parking lot, according to the probable cause affidavit.

Williams told police that he had known before Nelson picked him and Taylor up that the plan was to rob the marijuana sellers, listed in Williams’ phone as “White Weed Man,” court documents said.

Branch told police that before meeting in the bar parking lot a mask and firearm were given to him for the robbery, court documents said.

Branch and Nelson drove out of the parking lot and parked the car on a side street before running to Taylor, who was lying in the street, court documents said.

Branch initially ran to Taylor but then ran away and walked home, according to the probable cause affidavit.