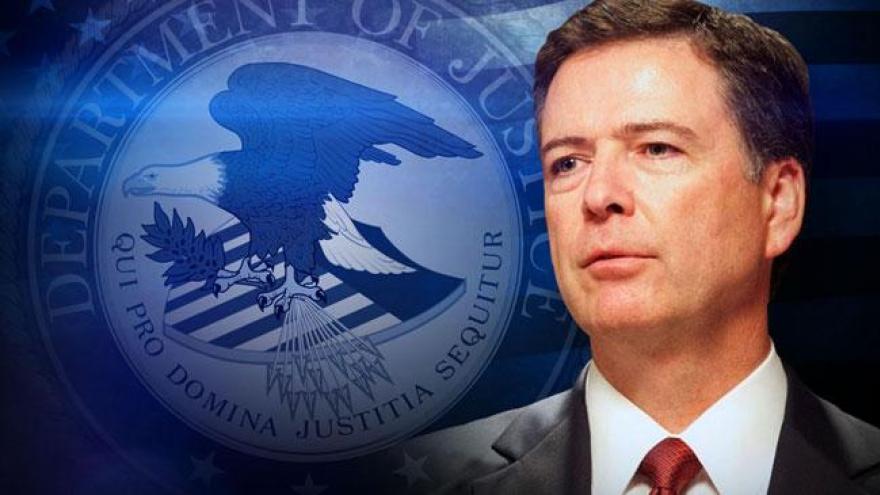 (CNN) -- Former FBI Director James Comey is scheduled to appear before the Senate intelligence committee on Thursday, with lawmakers seeking answers as to whether he believes the President sought to obstruct his Russia probe or demanded his loyalty before he fired Comey.

Deputy Attorney General Rod Rosenstein will testify Wednesday. Rosenstein wrote the memo that the White House used as the initial justification to fire Comey, and later called in a special counsel to take over the Russia investigation.

The sessions represent a moment of immense risk for the White House and could counter its emphatic denials that Trump sought to influence the Russia probe or that there is any evidence of wrongdoing.

"Clearly, it would be very, very troubling if the President of the United States is interfering in investigations that affect potentially the president and his closest associates," Virginia Sen. Mark Warner, the top Democrat on the Senate intelligence committee, said on CNN's "State of the Union" on Sunday.

Anticipation over Comey's appearance will return the administration to a state of siege, which has been partially lifted in recent weeks during Trump's foreign trip and the build up to his decision to quit the Paris climate pact.

So pivotal is Comey's appearance to the Russia drama that there was intense speculation about whether Trump will seek to invoke executive privilege to block the former FBI chief's appearance and to keep their conversations private.

Monday, the White House confirmed it would opt not to do that.

Seeking to block Comey's testimony could have amount to a grievous political misstep since it would instantly be seen as sign that the White House has something to hide.

The crucial point at issue in Thursday's hearing will be whether Comey believes that the President sought to obstruct his investigation into alleged collusion between members of Trump's 2016 campaign and Russia, at a time when Moscow was accused of interfering in the presidential election.

Sources familiar with Comey's thinking told CNN last month that he now believes that Trump was trying to influence his judgment about the Russia investigation, during several conversations. But whether that influence amounts to an obstruction of justice amounts to an open question.

Earlier in the month, sources told CNN that the President asked Comey to end the investigation into his former National Security Adviser Michael Flynn, a request the then-FBI chief noted in a memo as he was so disturbed by it.

Comey was also "taken aback" by Trump's request for a loyalty pledge at a dinner at the White House in late January, CNN's Jake Tapper has reported.

Democrats who argue that Trump has already behaved in a manner tantamount to obstructing justice meanwhile jumped on Trump's comment in an NBC interview in May that he was thinking of the Russia probe when he fired Comey.

The Washington scandal machine went into overdrive when The New York Times reported that Trump had told a high-level Russian delegation in the Oval Office that Comey was a "nut job" and that firing him had eased "great pressure" on him.

What will Comey say?

Comey, who has a record of engineering theatrical political moments, is apparently keen to discuss his tense interactions with Trump. He has an incentive to put his side of the story, since the White House has publicly argued that he was not up to the job of leading the FBI since he was dismissed.

"If he says categorically, 'It is my conclusion that the President of the United States was trying to instruct my investigation,' full stop, that is historic. "

"If he doesn't say anything categorical, if he says, 'Well you know, I felt this way, it could have been otherwise' ... if it is less than fully clear, then I think it gives both sides a lot of ammunition to argue through the rest of the summer and probably into the fall about what does all this mean."

While Comey is expected to discuss his conversations with Trump, it is not clear how far he will feel constrained by the fact the interactions are also likely to form a key part of the special counsel investigation now being led by his predecessor as FBI director, Robert Mueller.

He may also be unwilling to offer much clarity on the status of the Russia investigation itself up to the point of his departure from the FBI, given legal considerations and the fact that key evidence is likely to be classified.

Senators on both sides will want to know whether Comey felt pressured by the President to close down the Russia investigation and will likely press him on reports that Trump demanded his loyalty.

They will also certainly question the star witness on Trump's insistence -- in a letter telling Comey of his dismissal -- that he told the President on three occasions he was not being personally investigated.

"That phrase raises a lot of questions in my mind," Republican Sen. Susan Collins of Maine said on CBS "Face the Nation" on Sunday.

"Does Mr. Comey agree that that is what was said? Why would he tell the president that? What was the tone and the context of those discussions on three different occasions, if they, in fact, are accurately portrayed in this letter?"

Should Comey deliver devastating testimony on any of those questions that suggests Trump obstructed justice, he will significantly worsen the political challenges facing the President.

"It becomes the testimony of one person," Zeldin said, "one who will then become Robert Mueller's witness in the grand jury investigation in which they will determine whether or not obstruction occurred."