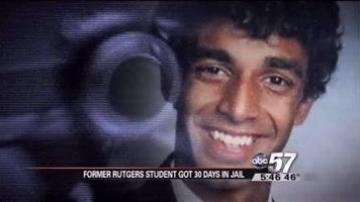 NEW BRUNSWICK, N.J. – It was an emotional day in a New Jersey courtroom as a former Rutgers student learned his fate.

Dharun Ravi was sentenced to 30 days in jail, 3 years probation, a fine and he must get counseling.

Ravi was convicted for spying on his gay roommate with a webcam.

Tyler Clementi committed suicide shortly after the incident. Ravi didn't speak, but before sentencing members from both families addressed the judge.