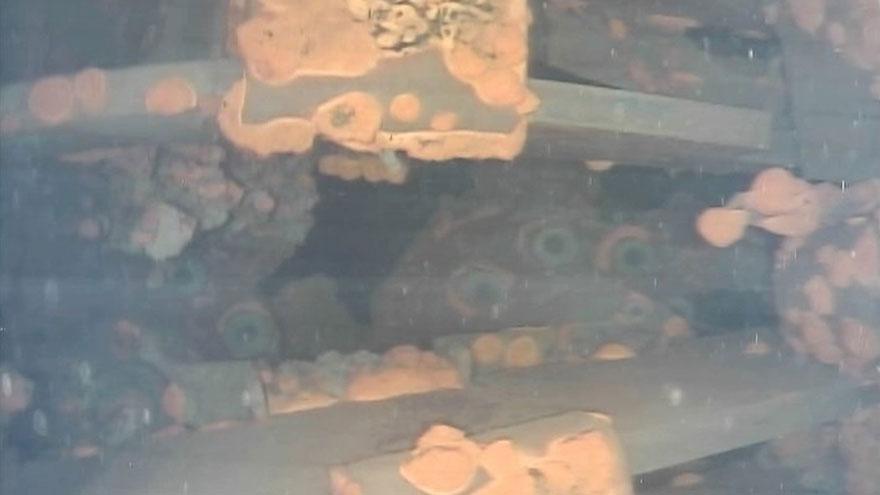 By Euan McKirdy and Yoko Wakatsuki

TOKYO (CNN) -- A robot operating deep inside a failed reactor at the stricken Fukushima nuclear plant north of Tokyo has revealed what appears to be stalactites of melted nuclear fuel, the plant's operator has said.

The discovery is considered a key development in the decommissioning process of the plant, which suffered a catastrophic meltdown in 2011 after a huge tsunami swamped the facility.

Operating remotely within submerged parts of the Fukushima Daiichi plant's Unit 3 reactor, the robot sent back 16 hours worth of images of massive, lava-like fuel deposits on the floor of the pedestal, a part of the reactor that sits underneath and supports the core.

"You can see something melted and solidified fallen from the inside of the reactor," Takahiro Kimoto, acting director for nuclear power and placement, told journalists.

"So we believe there is high possibility that it was molten metal and fuel debris."

He added that the data and imagery would be invaluable in determining how to remove the fuel debris.

"From today's investigation, we confirmed likely melted materials that are consolidated, (including) some fallen substances such as grating and sediments," a statement said.

However, it added that further analysis of the data is needed to confirm "conditions inside the pedestal" which will be examined "based on the image data obtained through consecutive explorations."

The discovery is key to determining how to further advance the cleanup of the plant, a process that is expected to take decades.

"This was the first time that we could confirm the status inside the pedestal," TEPCO spokesperson Maki Murayama said. "This is a big step towards the decommission process."

Having entered the stricken Pressure Containment Vessel (PCV) through a pipe designed to prevent the escape of radioactive gas, the robot descended into the cooling water which accumulated following the accident.

The device was equipped with thrusters to navigate through the water, and featured front and rear cameras.

The small "radiation-hardened, screw-driven" submersible robot was designed to fit through the narrow, 14-centimeter (5.5-inch) diameter entrance of the pipe, according to the Tokyo-based International Research Institute for Nuclear Decommissioning (IRID), which developed the device alongside technology company Toshiba.

"In this case, we had to meet the specific challenges of limited access and flooding, in a highly radioactive environment. Working with IRID, we succeeded in developing a small robot with high level radiation resistance, and through its deployment we expect to get information that will support the advance of decommissioning."

As the robot navigates through the ruined reactor, melted equipment and the fuel deposits can be seen.

The mission was launched after previous photographic inspection of the Unit 3 reactor suggested that, "during the accident, fuel assemblies melted from the excess heat, dropping from their original position down to the pedestal area," according to a statement released by TEPCO last week.

Technicians guided the robot over three days to film the inside of the reactor and the damage wrought by the meltdown.

The catastrophic event was caused when a 9.0-magnitude earthquake struck near the coast of Japan's main island of Honshu, creating a massive tsunami, knocking out the nuclear power plant's cooling systems. The cores of three of the plant's six reactors were damaged by overheating, and the resulting hydrogen explosions blew apart the buildings surrounding two of the reactors.