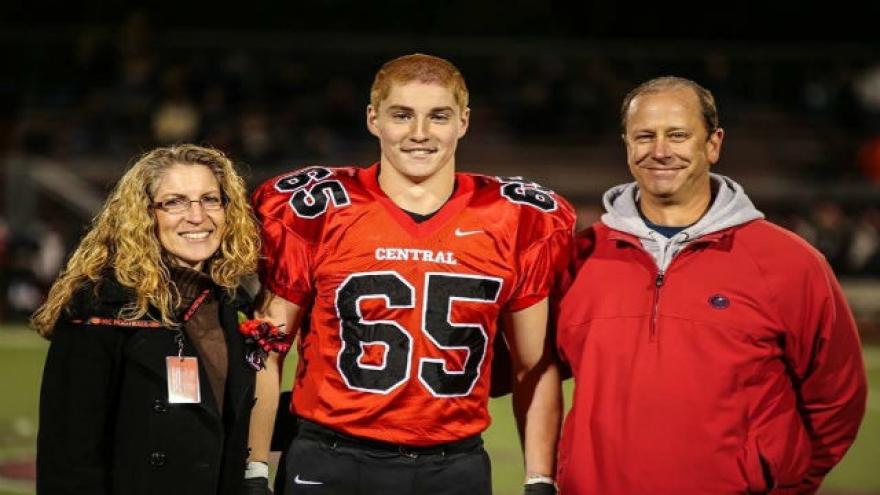 (CNN) -- A scathing grand jury report released Friday described alcohol-fueled fraternity hazing at Penn State University and said the rituals were a pervasive and dangerous practice that the university has been apathetic to and failed to prevent for years.

The grand jury wrote the report following its investigation into the hazing death of a sophomore Beta Theta Pi pledge earlier this year, saying "it would be failing its duty ... if it did not report to the public both what it learned and the certain dangers it foresees if students, university administrators, and the General Assembly resist adopting profound changes on college campuses and communities in Pennsylvania."

In a news conference as the report was released, Centre County District Attorney Stacy Parks Miller said the grand jury created it because jurors decided "something is broken and wanted to reform the system." Earlier this year, Parks Miller brought charges against 26 fraternity members related to the death of Timothy Piazza, the sophomore Beta pledge.

Despite the legal drinking age in Pennsylvania being 21 and the existence of state laws against hazing, the grand jury heard testimony from members of different fraternities at Penn State describing events such as a "gauntlet" and an "obstacle course" in which pledges were forced to drink alcohol at various stations. But there was also testimony that went beyond drinking and decency.

The report described activities such as the "elephant walk," in which pledges had to walk in a circle while inserting a finger into the anus of the pledge in front of them and cupping the scrotum of the pledge behind them. There were also "crate races," where pledges had to finish the contents of a crate of several bottles of alcohol and beer; and forcing pledges to drink concoctions of old food and condiments blended together -- and in one case, a drink made from cat food, urine, semen and alcohol -- which usually resulted in the participants vomiting.

A statement from Penn State that was issued Friday with the public release of the report said the university appreciated the efforts of the grand jury but it disagreed with some of its findings and cited what it called "factual errors" in the report.

The university thanked the panel for its "honesty" in concluding that "'the Grand Jury is mindful and troubled that there is no means of preventing another tragedy like the death of Timothy Piazza,'" the Beta pledge who died in February.

However, it said, "Our response to the report does nothing to diminish our recognition of the loss suffered by the Piazza family."

Parks Miller described Penn State's response to the report -- that there was nothing to be done to prevent another death -- as "sarcasm at its worst."

An attorney for Piazza's family read a statement from his parents Friday following the district attorney's news conference. In it, Jim and Evelyn Piazza said they were "shaken and appalled by the findings of Penn State's long time knowledge of dangerous hazing, the excessive drinking culture, sexual assaults and other abusive behavior, and the University's preference to ignore and/or condone such behavior, to better promote itself as a 'fun place to go to school' rather than a great place to get an education."

They said the report made clear that the university "knew about the deep-rooted problems" but "allowed them to continue in hopes that somehow they would rectify themselves," and faulted university officials for not fully implementing the protocols and changes it pledged after their son's death.

The grand jury report warned that the university must join efforts to stop hazing and start holding people accountable. It outlined a series of recommendations, including establishing a hazing hotline, having zero tolerance for students who violate hazing laws, and strengthening the university's hazing policy and laws on giving alcohol to minors.

The university, in a response filed in court, said that information available to the grand jury and its own response "make clear that the University -- in particular through its Vice President for Student Affairs Damon Sims -- has made extraordinary efforts, and shown an unwavering commitment to promoting safety and accountability and aligning the values and behaviors of the Greek system organizations with the expectations of the University."

Despite aggressive efforts to address these issues, the university said in its response, the report "ignores totally or criticizes and dismisses these major Penn State efforts."

Since Piazza's death, the response said, "Penn State has taken additional and unprecedented steps to help curb a national epidemic of binge drinking, especially within the 'Greek system.'"

The death of a pledge

Piazza, 19, died after a Beta Theta Pi initiation ritual on the night of February 2 at the Penn State fraternity house in State College, Pennsylvania.

A total of 26 fraternity members have been charged with various offenses in connection with his death.

Surveillance video showed the sophomore was given at least 18 drinks in 82 minutes by members of a fraternity that was supposed to be alcohol-free as a result of a suspension eight years ago.

Piazza's blood alcohol level went "from a zero to as high as a .36," the report said, almost five times the legal limit.

Other security camera video played during a preliminary hearing in June detailed his harrowing final hours, showing him falling several times and staggering through the fraternity house before disappearing near basement stairs, where police say he plummeted 15 steps and lost consciousness.

A few minutes after he fell down the stairs, the report said, multiple Beta brothers emerged carrying Piazza with his shirt open and a tennis ball-sized bruise on his torso.

A pathologist later identified the bruise "as the external appearance of a profound laceration to Tim's spleen inside his unconscious body," the report said.

Yet despite his apparent distress for 12 hours, the grand jury report said, the fraternity brothers did little to help him.

"No one immediately called 911," it said. "Instead, brothers gather around him, covering Tim with blankets, evaluating his condition, trying to manipulate his body to dress him, and searching online for the remedy to head injuries."

Descriptions of Piazza's final hours, spent bloody and unconscious in a basement, reignited a national debate on fraternity hazing.

The investigation into his death prompted the new grand jury report, which highlights ways it said Penn State fell short in addressing the "rampant and pervasive" hazing within its Greek community.

"Preventive measures have consistently failed to curb the hazing or ameliorate its dangers," the report said. "Self-regulation through the IFC (Interfraternity Council) has failed abysmally to prevent hazing during the pledging process."

Piazza's case underscores that drinking on campus extends far beyond the Beta fraternity, and the university "either did not know as it should have, or turned a blind eye," the report said.

The university took issue with that allegation, saying in its response that "to suggest that the University has not acted to address alcohol abuse in recent months or the past decade is simply untrue."

Accounts from another hazing victim

The report also described the case of James Vivenzio, who pledged to join Kappa Delta Rho in 2012. According to the report he left the school in 2013, due to "issues stemming from his hazing." The report said he made multiple attempts to notify the university and police about the fraternity's hazing, alcohol abuse and misconduct involving the circulation of photos of unconscious, nude women from fraternity parties.

He said the three-month hazing period included mandatory drinking games until pledges threw up, and those who refused to participate were forced to leave immediately, the report said.

It said pledges were forced to drink a warm concoction that included ingredients such as cat food, urine, semen and alcohol, among others.

In a bid to put a stop to the hazing, Vivenzio met in April 2014 with the head of the Office of Fraternity and Sorority Life who visited him in Virginia to see the evidence of hazing and abuse, the report said. Vivenzio testified that the official said there was not much he could do to stop it, according to the report.

Vivenzio also shared his hazing accounts with several departments at Penn State in 2014, including the board of trustees, according to the report.

The grand jury report stated that emails corroborate the fact that university administrators adopted a "policy of detachment" and chose not to involve themselves with fraternity affairs.

Vivenzio has previously alleged hazing at Penn State's Kappa Delta Rho chapter. In 2015, he sued the university, the fraternity and others over his experience. Penn State disputed his story, but suspended Kappa Delta Rho for three years the same year he sued.

The fraternity's national leadership also expelled 38 members from its Penn State chapter after it conducted a "membership review and reorganization."

'A shocking apathy' from university

The university has known for a decade that members of the Beta Theta Pi fraternity were abusing alcohol during hazing events, but university officials did not pay attention to the complaints, the report said.

"Penn State administrators displayed a shocking apathy to the potential danger associated with doing nothing," the report said. The university "abdicated its moral responsibility" and let Beta's national fraternity step in to help contain alcohol abuse at the local chapter.

The report slammed the university's assertion that it did not have the authority to stop misconduct at private property -- most fraternity homes are off-campus -- or interfere with the Interfraternity Council jurisdiction.

The university had the power and the obligation to "at least investigate the alarming allegations" brought up by Beta alumni and its national chapter, the report said.

Hazing was not just limited to Beta, but affected other fraternity groups on campus as well, it said.

"Penn State fraternity hazing is not simply a single-borne illness infecting only one fraternity but a cancer that has spread across the Greek alphabet," the report said.

The grand jury said that while internal enforcement fell short on stopping hazing and alcohol abuse, so has criminal law. The report cited the punishment mandated by law as inadequate, making it difficult for prosecutors in such cases.

"By criminalizing hazing as a mere third-degree misdemeanor carrying a maximum possible punishment of one year incarceration... and a $2,500 fine, it leaves no particularized ability for a prosecutor to pursue any semblance of justice for the victims of egregious cases," the report said.

In such cases, the report said, prosecutors are forced to try to fit the facts of serious injury or death from hazing into nonrelated statutes.

"There is no justice in a fine and maybe probation for the death of a 19-year-old who will never graduate from college; never marry; never serve as his brother's best man; never introduce his parents to their grandchildren," the report said.

Prosecutors initially believed that the basement cameras were not working, but Parks Miller, the Centre County district attorney, said a fraternity member had deleted the basement portion of the footage.

Beta Theta Pi International Fraternity has described the charges against the members as "incredibly disheartening as the organization and its membership continue to grieve Tim's passing and the pain experienced by his family."

Piazza's family has alleged that fraternity brothers got pledges as drunk as possible in a hazing ritual known as the gauntlet.

"Then when one of them was in dire trouble as a result of their planned event, they abandoned him," the family said in a statement.

Piazza's father described the anguish his family has gone through.

"We have spent the last eight months wondering how this could happen," Jim Piazza said last month. "The visions of him lying in the hospital bed, battered and bruised and on life support, looking as if he got hit by a tractor-trailer, made no sense."

The grand jury convened to investigate Penn State and Piazza's death. It will examine at least two other university fraternity misconduct allegations that never resulted in criminal charges.