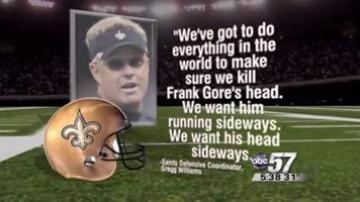 Audio recordings have been released connected to the bounty scandal that rocked the New Orleans Saints.

A documentary filmmaker recorded former Saints Defensive Coordinator Gregg Williams. He was firing up players before a January playoff game against the San Francisco 49ers.

In the tapes, you can hear Williams graphically telling players to inflict terrible injuries on the competition.

The NFL cracked down on the abuses suspending Williams indefinitely, but now the explosive tape brings new pressure on the NFL.