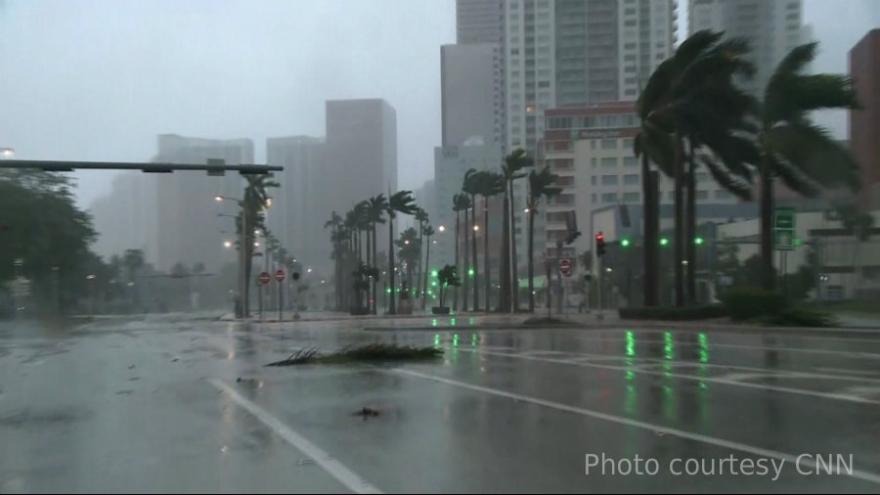 Irma hurled winds of 130 mph as it prepared to lash much of Florida. As of 7 a.m. ET, the hurricane's eye was about 15 miles southeast of Key West, the National Hurricane Center tweeted.

"It's going from crappy to worse," said John Hines, who did not evacuate and stayed in his home in the Key West, at the southern end of the island chain that stretches off the tip of the Florida peninsula.

Hines said there's some flooding outside his house, but from the rain, not the storm surge.

"All the interior doors are starting to rattle now, sounds like someone is knocking on the front door," he said. "The winds are picking up. It's only going to get worse as it gets closer."

Almost the entire state of Florida is under a hurricane warning affecting at least 36 million people, with concerns of devastating gales, heavy rain and life-threatening storm surge.

Those who did not evacuate ahead of the storm are in danger, Federal Emergency Management Agency Administrator Brock Long said Saturday.

"You're on your own until we can actually get in there and it's safe," he told CNN.

"The message has been clear: The Keys are going to be impacted. There is no safe area within the Keys. And you put your life in your own hands by not evacuating."

The major concern is the storm surge, which can cause devastating flooding and could reach as high as 15 feet in some areas, officials warned.

Key West business owner Jason Jonas said he stayed behind because he's in a home that is "built like a bunker."

"It's pretty much the only reason I considered staying here because I knew that I had a pretty good chance of making it through this thing," he said.

"We're 30 plus feet above sea level and in a place that's built to withstand 225 mph winds -- I mean that's a better chance than being exposed out on the highway in traffic trying to make it to Georgia."

Mass evacuations sent throngs onto jammed highways heading north and created a severe gas shortage in some parts the state.

Several Florida cities are in or near the forecast path of the storm's eye.

What's with all these hurricane forecast models?

"We're going to get through the winds, we'll get through the rain, depending on what the level of surge is," he said. "But more importantly, the surge will occur tomorrow at the same time we have a high tide -- so that compounds the problem."

In Fort Myers, where storm surge warnings are in effect, Evanson Ngai stayed up all night, tracking the hurricane.

"I've tried to get some sleep but I can't. Just the nervousness, trying to keep an eye on it to see if its track will change," he said.

Ngai plans to crouch in the bathtub when it makes landfall.

"Right now, it's a little bit of gusty winds and some rain," he said early Sunday. "We've moved everything away from windows. We're hoping for the best -- we've bought nonperishable foods and water, and we have a flashlight."

Florida Power and Light estimated 3.4 million of its customers could be without power at some point during Irma, the company's largest number of outages ever.

"We think this could be the most challenging restoration in the history of the US," company spokesman Chris McGrath said.

Officials in other states are also keeping an eye on Irma. South Carolina Gov. Henry McMaster issued a mandatory evacuation for some barrier islands, while Georgia Gov. Nathan Deal expanded a state of emergency to include 94 counties.

Alabama and North Carolina may also be affected, FEMA said.