Hurricane Jose is moving away from outer Caribbean islands 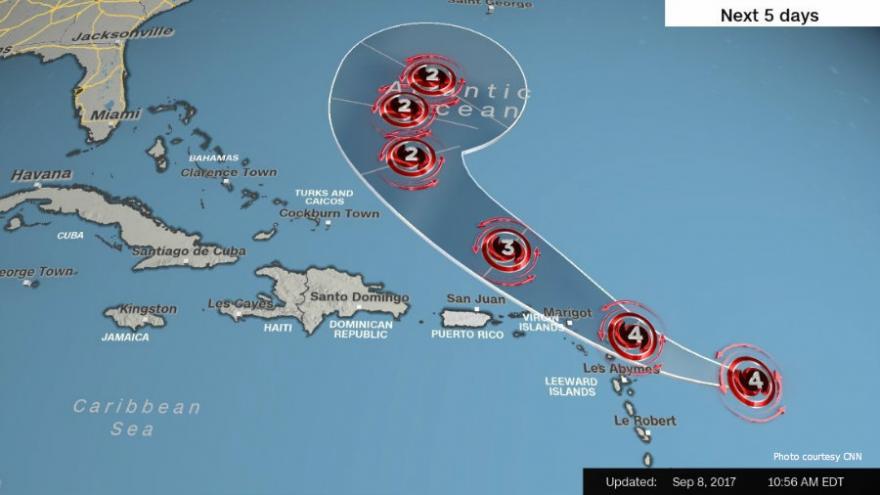 Jose, a Category 4 storm, had been passing north of the outer Caribbean islands and is expected to move away Saturday night, the National Hurricane Center said.

Jose, with maximum sustained winds of 145 mph, was about 85 miles north-northeast of the northern Leeward Islands around 5 p.m. ET. It was moving northwest at 14 mph, the center said.

The coast isn't exactly clear yet.

St. Martin and St. Bart remained under tropical storm warnings as of Saturday evening. And Jose could produce up to an inch of additional rainfall on the island of Anguilla throughout the evening, which "will maintain any ongoing flooding," the hurricane center said.

But it was nothing like the force delivered by deadly Hurricane Irma, which battered many islands, including Barbuda, just days ago.

On Wednesday, the eye of Irma passed over Barbuda, a tiny Caribbean island of about 1,800 people, destroying telecommunication systems and cell towers. The storm damaged about 95% of the buildings on the island, said Gaston Browne, Prime Minister of the nation of Antigua and Barbuda.

Despite fears that Barbuda would be struck a second time, it was spared from Jose as the storm veered north.

Jose is to move farther from the islands into the northern Atlantic.

Before Jose's slight weakening, the Atlantic had two hurricanes with winds of more than 150 mph at the same time for the first time on record, Colorado State University meteorologist Philip Klotzbach said Friday.

A third storm, Katia, made landfall late Friday north of Tecolutla, Mexico, as a Category 1 hurricane but had weakened to a tropical depression by Saturday morning, the hurricane center said. It was to break up over eastern Mexico, with heavy rains still expected.

Katia's remnants led to a mudslide that killed two people Saturday in Xalapa, a city in the Mexican coastal sate of Veracruz, Gov. Miguel Angel Yunes said. Rivers in the mountainous region were flooding Saturday afternoon, and levels still were expected to rise, the governor said.