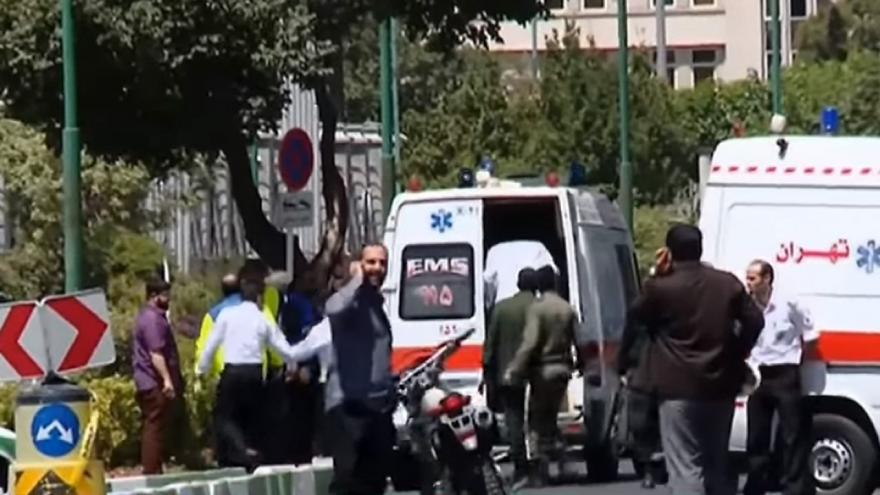 By Shirzad Bozorgmehr and Angela Dewan

TEHRAN, Iran (CNN) -- Attackers have mounted simultaneous gun and suicide bomb assaults on Iran's parliament building and the tomb of the republic's revolutionary founder, in one of the most audacious assaults to hit Tehran in decades.

At least 12 people were killed and dozens more injured in the twin assaults on the Iranian capital, state media reported. A third attack was foiled, Iran's Intelligence Ministry said.

ISIS issued a swift claim of responsibility. Its media wing, Amaq, claimed "fighters with the Islamic State" carried out the attack, but did not offer evidence.

The attack shocked Tehran: Until now, Iran has largely escaped the regular assaults launched against other participants in neighboring Syria's civil war. In a region plagued by sectarian violence, residents of the Iranian capital have lived in a peaceful oasis.

The attackers took a number of hostages and at least one detonated a suicide bomb. Sporadic gunfire was heard before Iranian authorities declared the situation under control about four hours later. All four attackers were killed by security forces, the semi-official Fars news agency reported.

At the same time as the parliament attack was launched, a shooting spree and suicide bombing targeted the Ayatollah Khomeini mausoleum about 25 kilometers (15 miles) away, on the southern outskirts of the Iranian capital. Fars reported that one person was arrested at the tomb.

CNN has not independently verified the number of victims in both attacks and it was not immediately clear whether the number of dead included the suicide bombers.

Iran's counter-terrorism unit said that several "terrorist groups" had been able to enter Tehran, though it did not say where they were from. Members of another group had been apprehended.

The speaker of the Iranian parliament, Ali Larijani, attempted to play down the attack, describing it as a "minor issue."

"As you know, some coward terrorists infiltrated a building ... but they were seriously confronted," he said in a statement.

"This is a minor issue but reveals that the terrorists pursue trouble-making."

The attackers chose symbolically significant targets for their assault. The tomb houses the body of Ayatollah Ruhollah Khomeini, the Islamic Republic's founder and first supreme leader, and it is a popular destination for tourists and pilgrims. He led the revolution that overthrew the Shah in 1979 and was supreme leader for 10 years.

The parliament, the Islamic Consultative Assembly or Majlis, is Iran's principal legislative body. It has 290 members, including women, and there are representatives of religious minorities including Christians, Zoroastrians and Jews.

Gun ownership is heavily controlled in Iran, raising speculation that the attackers smuggled weapons into the country.

Iran -- with its largely Shiite population -- has been involved in military actions against Sunni terrorist groups such as ISIS, who regard Shiites as apostates, but such terror attacks in the country are rare.

Last year, Iran's government said it thwarted "one of the biggest plots" by terror groups targeting Tehran and other major cities during the month of Ramadan. This year's holy month started almost two weeks ago on May 26.

The last major attack in Iran was in 2010 when a Sunni extremist group carried out a suicide attack against a mosque in Sistan-Baluchistan killing 39 people. Kurdish groups have carried out small scale attacks against Iranian security forces in the north-west of the country.