GOSHEN, Ind.—A master’s student from Indiana University-Bloomington is spending the summer in Goshen studying the city’s greenhouse gas emissions as part of a statewide project to learn about climate change in Indiana.

For the first time ever, IU students have been placed in 13 Indiana cities and one county, from Gary to Evansville, to inventory greenhouse gas emissions in partnership with local governments, businesses and nonprofits as part of Sustain IU’s Resilience Cohort. 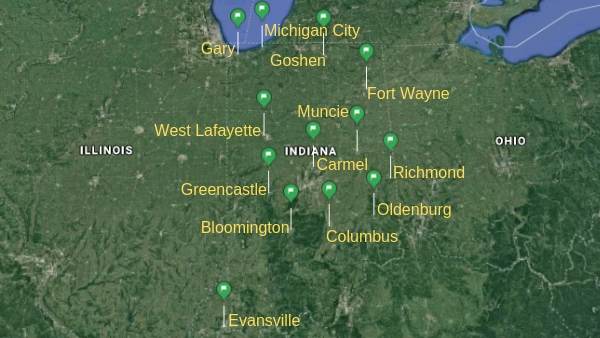 Thirteen cities and one county are participating in the Resilience Cohort this summer. Google Maps

IU student Bronson Bast arrived in Goshen in late May to assist the city in its ongoing efforts to reduce its greenhouse gas emissions. The Youth Caucus in Goshen signed an environmental resolution in April, committing the city to reduce carbon emissions, increase energy efficiency and renewable energy use, and become climate change-resilient.

“We’re looking at things like electricity used, natural gas used, measuring how much emissions are coming from cars, looking at the wastewater and looking at other industrial processes that are contributing to greenhouse gas emissions,” Bast said. “They’re looking for the best, most effective ways to reduce their emissions.”

Bast, a Clark County native, and Aaron Sawatsky-Kingsley, the City Forester in Goshen, are working on two separate greenhouse gas inventories; one is for the local government operations in the city and the other is for the entire community of Goshen.

“Having a baseline, we’ll have a place to measure against in the future so that we can see how we’re making progress and we can say here’s where we made good progress, here’s where we made good difference, here’s the next area and we can continue to become more efficient, more thoughtful, more careful in the way that we operate in our ecosystem,” Sawatsky-Kingsley said.

The team has just completed the data collection phase of the project and will spend the month of July studying it before presenting their findings to the city council at the end of the month. According to Sawatsky-Kingsley, the findings will be made public and the city hopes to use what’s learned about emissions in Goshen to create a climate change action plan.

Sawatsky-Kingsley hopes that the study will even be used in years to come as a baseline for Goshen to use in its continued efforts to curb the impacts of climate change.

“As we discover where we are being least deficient, we can then begin to put together a plan to be more efficient that will save us money in the future, in the way our buildings operate, in the way that our vehicles operate, those kinds of things,” Sawatsky-Kingsley said.

For Bronson, he says his short time in Goshen has already been made meaningful by the willingness and interest he’s seen in the city's  residents to discuss the issue.

In conversations around town, Bast has noted that the obstacles the project faces are not rooted in disbelief of climate change, but in lack of knowledge in how to combat the global issue.

“It’s more that they don’t know what they can do. It’s a really difficult problem and individual action is hard and I think the community aggregation and taking action as a community is really empowering. This is really the first step to take to figure out how to do that,” Bast said.

Right now, for those interested in getting a jump start on understanding the impacts of greenhouse gas emissions, Bast suggests seeking out an energy audit for individual homes, which Nipsco offers for free.

Sawatsky-Kingsley mentioned the record flood in February 2018 when discussing the project’s importance.

The flooding in Goshen in 2018 and again recently in early May coupled with projections that a warmer climate will increase the number of heavy rain events provide a reminder that Michiana has already been hit by the impacts of climate change.

Rogers park, the skate park and bus stop are all under water in Goshen due to minor flooding of the Elkhart River. pic.twitter.com/XbfgNfJnQK

“The scientists right here in Indiana understand that we are facing a huge challenge as a state, as a country and as a world. Students are starting to learn to measure these greenhouse gas emissions and this is a skill that will become necessary more and more as city governments and nonprofits and businesses are measuring their greenhouse gas emissions and trying to reduce them,” said Andrea Webster, the Implementation Manager for the Resilience Cohort.

The challenge Webster mentions is outlined each year by the Environmental Protection Agency (EPA) in a national Greenhouse Gas Inventory.

Since 1990, the EPA has studied both the amount of emissions and the impacts they have on the Earth.

The EPA’s reports show that many greenhouse gases, both naturally occurring and synthetic chemicals, have been mainly elevated due to human activities over the last 50 years.

Impacts of a warmer climate according to the EPA include:

The EPA says that many local governments are now planning for expected changes to occur, often starting with a greenhouse gas inventory, similar to the project underway in Goshen.

“This is Goshen’s attempt to try to contribute to the world’s effort to try to curb climate change. We know that there’s no way to curb it completely at this point but we can still try to moderate its impact by reducing our greenhouse gas emissions,” Webster said. “As a result we’re all going to have to make some pretty big changes, and it’s really great that the local leaders across the state understand this and it’s a nice big broad effort.”

Webster says South Bend and Indianapolis have already completed greenhouse gas emission inventories, which paved the way for more cities to get their own done.